Unknown (from the future)

Ele is a fighting game character introduced in Plasma Sword, the second game in the Star Gladiator series.

Ele is a mysterious yet cheerful young rhythmic gymnast who fights with a Plasma Ring who traveled time to complete her mission. Ele has a kind and cheerful personality to those who meet her and that she is always determined to enjoy herself and live her own life to the fullest.

In the distant future, Ele was taught how to fight by her mother and is able to use many of her acrobatic skills and techniques. In Ele's time, Bilstein's ghost, which was obsessed with its never-ending hunt for Hayato, had attacked Ele's home one day. The status of Ele's father is unknown, but her mother had died during the incident.

Determined to stop the sudden and unfortunate tragedy while attempting to change history for the better, Ele used a time machine to travel back into the past from the distant future so that she could find and destroy Bilstein's ghost in order to prevent the tragic event from happening, but Ele knows and realizes that she has a time limit on how long she can stay in the past. Thus she hurries to find and vanquish Bilstein's ghost as soon as possible.

In one of her two possible endings, June and Hayato come up to her and start a conversation.

At this point, Ele battles June and must be defeated for the rest to be viewed.

A beam of light surrounds Ele, signifying that her time there has expired.

The next thing seen is an image of a baby with a man and a woman holding it. Their faces are not shown.

Ele made a small cameo in one of Hayato's win poses in Marvel vs. Capcom 2: New Age of Heroes, appeared as a card in SNK vs. Capcom: Card Fighters Clash and appeared in Felicia's ending in Capcom Fighting Evolution. 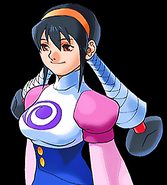 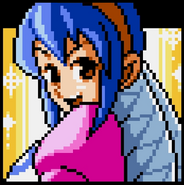