El Stingray (El Stinger in Japan) is a character from Slam Masters series of wrestling games.

El Stingray is a diminutive masked wrestler whose speed is unparalleled. He's proud of his midair assault techniques and feels the most alive while performing aerial attacks before an audience. El Stingray is involved in an almost constant rivalry with The Great Oni, who uses a similar flashy wrestling style. 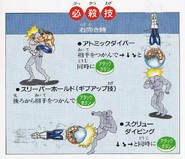