Effie (エフィー, Efī?) is a non-playable character in the Street Fighter series. She is Necro's girlfriend who first appeared in his ending in Street Fighter III: New Generation, where she rescued Necro. In 2nd Impact and 3rd Strike, she appears as a member of the Judgment Girls.

Effie is very small, and has long, blonde hair held in two ponytails by red bows, she has blue eyes.

In Effie's Street Fighter V profile artwork, she also wears a red, low-cut dress though it is not covered in 'spikes' like her SFIII attire. The dress has a single strap over the left shoulder and and a black pattern running diagonally down it. The boots, gloves and collar are now black in color and she has bandages wrapped around her legs. She is also shown carrying a chainsaw.

Effie is loyal to her boyfriend Necro and also mimics some of his actions.

Effie met Necro while they were captured by Gill's organization, Illuminati. During that time they became fast friends, and soon lovers. During their time with the Illuminati, they were experimented on as part of the "G-Project".

In Rashid's character story, Effie can be seen on Necro's profile picture ("FreedomTraveler_Ilya") in Rashid's social media contacts and she is also seen in the background of the Spooky Arena stage (alternate version of the Underground Arena stage).

In 3rd Strike, Effie and Necro are now fugitives after Gill finds out Necro survived. Gill orders his organization to hunt them down. While running away from members of the organization, they reach the top of a train trying to escape out of Russia. Necro fights them off and succeeds. Then Necro realizes that, even though he's a mutant, he can use his abilities to protect Effie.

Effie (left) with Houmei and Pat. 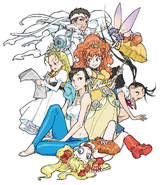 Effie with (clockwise from her) Chun-Li, Devilotte, Jin Saotome, Princess Tiara with Variel and Ibuki. Art by Kinu Nishimura.

Cameo in Felicia's Capcom Fighting Evolution ending (on the right).

Effie and Necro art by GENZOMAN.