Edward Falcon (known as Fokker in Japan) or simply Falcon, is the lead character of the Power Stone series of 3D fighting games.

Falcon is 21 years old, weighs 160 pounds and measures 5'11". He has a original fighting style loosely based on boxing.

He is the son of archaeologist Pride Falcon. He is from Londo (a reference to London, though the Power Stone 2 manual incorrectly specifies London as his place of origin). When in Power Change, he is known as the Red Whirlwind.

In the anime, during the final battle against Final Valgas, He transforms using the Light Stone and becomes the Light Whirlwind.

Falcon has short blonde hair with a pilot goggles on his head. He wears a classic red pilot uniform under a white tie and wears brown gloves and boots. His uniform has a United Kingdom flag logo on his left shoulder and an pale blue eagle logo on the back of his uniform.

In the anime, he remains largely the same like in the games, and only replaces his medium blue flag with white cross designs within his outfit. When takes on a boxing match, he was seen shirtless.

In his Power Change mode, he wears a red suit of metal with gray metal background, wears a red metal helmet and dons a gray rocket on his back.

Hailing from the town of Londo, noble Falcon circles the world in his airplane, "Hockenheim." He searches for the Power Stones he discovered in an anient family legend. Falcon has a strong sense of justice. He specializes in boxing and destroys evil with sharp moves and explosive punches.

In his ending, Falcon obtains the Power Stone he was searching for and as the cave crumbles, Pride catches him on his plane. However, Falcon drops the Power Stone, and blames it on Pride and his 'sloppy driving'.

While traveling across the Atlantic Ocean to his hometown, Londo, Falcon's airplane Hockenheim is caught in a mysterious dark cloudbank and loses control. Someone's shadow flickers between the clouds in the lightning for a moment. When the clouds part, a gigantic floating castle appears.

"This must be the mysterious castle my father told me he had seen once... Good. I was getting bored!".

Falcon is perceived as the main character of the series, and is a balanced easy-to-control fighter with neither the flash of outstanding strengths or the drawback of outstanding weaknesses. Despite being a boxer, he can kick his opponents at the same time which enables him to somersault on them, and fights like a martial artist when he pulls his combo with punches and knocks them with a somersault. This also happens in the anime when he fights Kraken's crew with both punches and kicks.

Depending on a player's skill level, his double jumps and post-transformation attacks can be a plus - or a minus. During a power change, he gains powerful moves for both close and far range combat. In Power Stone Collection, Falcon unlocks the Soccer Ball.

In the anime, Edward Falcon goes on a journey to find his father Pride Falcon with his butler Apollis. In the first few episodes at his hometown in Sun Land, his father sends him a Power Stone, which he learns how to use. He also meets Ryoma, who wants to fight Falcon, and Rouge, a fortune teller. Rouge then tells Falcon to travel on a journey to go around the world searching Sun Land, Wood Land, Fire Land, Gold Land, Dark Land, and Soil Land for Power Stones.

Along the way, he encounters Kraken's servants named Octo and Pus, the Octopus Twins, who are after Falcon's Power Stone, as well as Ayame and her big brother, who is disguised as a girl, who are actually ninjas from Moon Land that are also after the Power Stone. His butler Apollis was also able to transform by Power Change using Falcon's Power Stone in one episode.

Over the course of the series, Falcon develops a crush on Rouge, though she seems to have a interest in Ryoma instead. To make things more complicated, Ayame and Cassie (the latter an original character created exclusively for the anime) develop feelings for Falcon, neither of which he has a romantic interest in.

Later in the series, Falcon eventually finds his father at the Dark Lands where Valgas also resides. He fights against Valgas, but loses. He is eventually able to summon the Light Stone to defeat Valgas and destroy his Dark Stone. In the end, Falcon decides to go on another adventure around the world, while leaving behind his father Pride at home and his butler Apollis is with him.

Falcon makes a small cameo in Capcom vs. SNK 2, in the Nairobi stage. He is on the left side, standing on a car with his back turned to the screen, next to Leona from The King of Fighters series.

He appears as a card in the Heroes & Heralds mode. 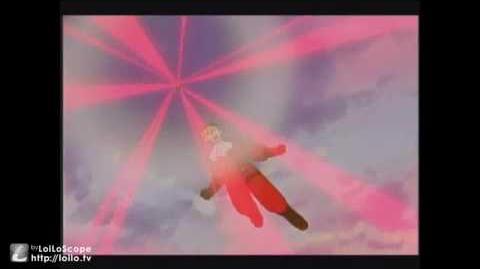