Edi. E (エディ.E?) is a character from the Final Fight series of beat em' up games. He is a member of the Mad Gear Gang and the boss of Final Fight's third stage, Metro City's West Side.

Edi. E is a tall, heavyset, middle-aged police officer with a beard. His uniform, which has the shirt collar unbuttoned to his chest, covers most of his body, thus making it difficult to accurately tell how much of his mass is fat and how much of it is muscle. Despite his build, Edi. E seems to be a good runner, at least in his debut game. He is often seen chewing a special gum with a "42910 points" flavor.[1]

In addition to being corrupt and immoral, Edi. E is rather cowardly, as proven by the fact that he always carries a gun as well as a nightstick and never fights unarmed.

Edi. E is a corrupt police officer and was a top lieutenant in Belger's Mad Gear Gang, in charge of the city's West Side. When Mike Haggar's daughter Jessica was kidnapped by the gang, Cody encountered Edi. E outside a bar; depressed to see that Metro City was so corrupt that even police officers worked for the Mad Gears, Cody fought him and won, despite the advantage Edi. E had with his firearm. As a result of this loss, Edi. E developed a grudge against Cody.

He has no regard for the safety of his Mad Gear cronies; the only thing that matters to him is the money Belger pays him - which is much more than his meager police salary - and stopping Cody and his friends.

Edi. E later framed and arrested Cody for the crimes of another Mad Gear member, Poison, in an ambush near a cemetery. Though Cody had been convicted of aggravated assault on numerous occasions, he was innocent of these particular crimes.[2]

Cody breaks out of prison whenever he feels like it and when he does, Edi. E usually chases him down again, even appearing in one of Cody's match win animations.

Despite having sufficient unarmed combat training in the police academy, Edi. E relies on his pistol to do the talking, especially when it looks as though he is losing. He isn't afraid to fire into a group of his own underlings if he thinks he can hit his opponent. He also uses his nightstick in close quarters and is relatively fast on his feet for his size. He spits out his chewing gum before he fights to avoid choking on it. 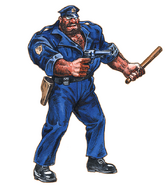