Eagle (イーグル, Īguru?) is a video game character from the Street Fighter series, first appearing as a non-playable opponent in the original Street Fighter. He would later return as a playable fighter in the crossover game Capcom vs. SNK 2 before eventually joining the cast of Street Fighter Alpha 3 Upper. He is an English bouncer and a master of the stick fighting martial art, Bōjutsu.

Eagle is a tall, muscular fighter with blond hair arranged in a pompadour; he also has a mustache, and a scar on each side of his face. His pomp, braces (suspenders), and formal dress are designed to make him a mixed counter-culture counterpart to Birdie, a punk; both are also named after golfing terms (an eagle is a score of two shots below par, whereas a birdie is one below par).

In the original Street Fighter, Eagle's outfit consisted of a dinner suit without the jacket, a bow tie, and suspenders. However, in Capcom vs. SNK 2 and the Game Boy Advance and PlayStation Portable versions of Street Fighter Alpha 3, he wears a white dress shirt with a red ascot tie, black pants, white gloves, dark dress shoes, and of course, his braces. His Street Fighter V profile has him barehanded and without the ascot; his arms are also visibly hairy, and his pants are a lighter shade.

Eagle's initial design in the original Street Fighter is a homage to the character Petrov (a bodyguard hired by noblemen) protrayed by Robert Baker from the Bruce Lee film, Fist of Fury.

Starting with his Capcom vs. SNK 2 incarnation (based off his appearance in the Street Fighter Alpha manga), it is apparent that Eagle had been made into an homage to the late Queen frontman, Freddie Mercury. In addition to resembling a blonde version of Mercury, some of Eagle's voice clips are remniscent of him (such as "the show must go on" and "no time for losers"). This has lead to speculation that since Mercury is commonly believed to have been homosexual (Mercury himself stated he was actually bisexual), Eagle is as well; this is backed up by several of his Japanese winquotes, which seem to indicate as much.

Eagle was born in the UK. A cold-blooded individual, Eagle is a bouncer who was employed as a newly-rich noble family's bodyguard during the first World Warrior tournament. He was hired to defeat Sagat, but was unsuccessful and returned to the bar scene, eventually becoming a living legend. He later fought against Ryu and lost.

In the Game Boy Advance and PlayStation Portable version of Street Fighter Alpha 3, Eagle appears as a playable character. Eagle seeks to perfect the beauty of his style, and find a perfect duel to match. He finds Guile and, knowing he is the bravest and strongest fighter in the Air Force, wants to test him. Guile refuses, saying that he is busy, but Eagle persists they fight nonetheless. After Eagle wins their match, he wants to know what Guile's mission is. Guile tells him he is on a mission to stop a narcotics ring called Shadaloo, and has heard rumors about Sagat joining them. Once Eagle hears this, he decides to find the Muay Thai King in order to test his long-time rival.

Finally, he finds Sagat, and finds it unfitting to see the former Muay Thai King reduced to a mere Shadaloo goon. M. Bison is intrigued to see Sagat defeated by Eagle, and fights him, but emerges the victor. Guile asks him to help do one more thing; rescue Charlie and destroy the Psycho Drive. While they infiltrate Shadaloo's headquarters, they find Charlie trapped in the Psycho Drive Power Plant. Eagle then destroys the machine with his perfected fighting skills and saves Charlie from harm. Eagle is excited that he had the chance to be back on the battlefield and thanks Guile, Chun-Li, and Charlie for the experience.

Eagle made his playable debut in Capcom vs. SNK 2.

Eagle appeared in Masahiko Nakahira's Street Fighter Alpha manga (years before his actual comeback in the games) as an opponent seemingly killed by Adon. The same happened with Final Fight character Maki in Nakahira's Sakura Ganbaru! manga. Both made their comeback in Capcom vs. SNK 2, with slight redesigns inspired by their manga appearances.

Eagle's fighting style, in Street Fighter Alpha 3 MAX and the hardcover version of Street Fighter: World Warrior Encyclopedia, is stated to be bōjutsu, a type of Japanese martial art involving the use of a single staff. Using two sticks however, his fighting style bears more resemblance to eskrima; a Filipino martial art involving a variety of weapons and open-handed techniques. Each of Eagle's special attacks and Super Combos are named after a British city, locale, or historical reference mixed in with a color motif. 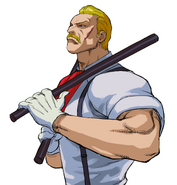 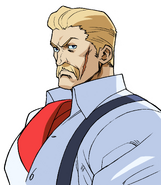