The Japanese version of the game, exclusive to the PlayStation 3, was developed internally at Capcom by the original team, and features more accurate emulation than the worldwide release. It also contains exclusive bonus content.

See Tower of Doom gameplay and Shadow over Mystara gameplay.

The game was released on August 22, 2013.[1] In Japan, the PlayStation 3 version received a retail release with exclusive bonus contents.[2]

Reviewing the Xbox 360 version, Rob Kershaw at The Digital Fix gave the game 8/10 noting that while the graphics and music have become dated since the original arcade releases in the 1990s, the port was faithful to the source and the development team had added plenty of extras to increase the game's longevity.[6] Erik Kain of Forbes opined: "It plays a bit like Double Dragon, the old Ninja Turtles games, or any of the other classic NES/SEGA side-scrolling brawlers, so if you're a fan of the genre or of classic D&D, the $15 Capcom is charging for Chronicles is going to be well worth it."[7] 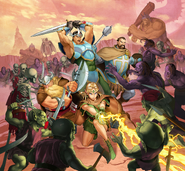 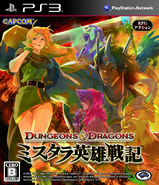 Japanese retail version
Add a photo to this gallery

Retrieved from "https://capcom.fandom.com/wiki/Dungeons_%26_Dragons:_Chronicles_of_Mystara?oldid=137901"
Community content is available under CC-BY-SA unless otherwise noted.