Dr. Cossack is a character from the classic Mega Man series. He first appeared in Mega Man 4.

Dr. Mikhail Cossack was one of the few scientists in the world capable of creating advanced, humanoid, artificially intelligent robots. Dr. Wily recognized his ability, and decided to use him in a scheme for his next world domination plan by kidnapping Dr. Cossack's daughter Kalinka. This forced Cossack to use his own robots to inadvertently carry out Wily's world domination scheme, but made it seem as if he was the villain. Mega Man fell for this facade right up until his battle with Dr. Cossack. However, Proto Man rescued Kalinka and returned her to Dr. Cossack, and the true circumstances became known. Afterward, as a token of thanks, Dr. Cossack constructed Beat for Mega Man.

He was the proud recipient of the Brzezinski Science Award and the Scientific Achievement Award, as well as numerous others.

In the manga series, Dr. Cossack is a robotics engineer from Russia. After graduating with a degree in robotics from the Ural Institute of Technology, he got a job at the Stravinsky Science Academy. One day, Dr. Wily kidnapped his daughter, Kalinka Cossack, and in exchange for her safe return, he was forced to lead eight robots he created into battle against Mega Man. After the truth of this incident was revealed, Dr. Light helped Dr. Cossack clear his name and return to the good geaces of the scientific society. Since then, Dr. Cossack has intensified his efforts in the research and development of robots. He became good friends with Dr. Light and his robots, and created Beat as gift for Mega Man. He is the proud recipient of the Brzezinski Science Award and the Scientific Achievement Award, as well as numerous other prestigious awards.

In Grim Reaper of Resurrection, Dr. Cossack is kidnapped by Skull Man during a live interview with Charlie about a book he wrote, The Future of Human-Robot Relations, selling over ten million copies worldwide. Mega Man and Dr. Cossack's robots rescue him.

After the events based on Mega Man 6 in "The Greatest Enemy in History", Dr. Cossack went to Japan with Kalinka, Dive Man, and Drill Man to help Dr. Light. They first checked the ruins of New Metropolis, where they found the real Mega Man and repaired him, and also Yamato Man and the other robots that were under Mr. X's control.

Dr. Cossack also appeared in Mega Man Gigamix, where he created Duo with the large arm of the white alien robot and assists in the battle against the Stardroids. 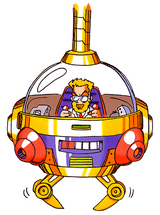 Cossack Catcher is the machine that Dr. Cossack uses in the fourth Cossack stage. Its design is based on the UFO prize catchers commonly found in arcades. Its weakness is the Dust Crusher (obtained from beating Dust Man). Players can also use the wire adapter to do some damage to this machine.

To avoid the risk of getting caught by the claw while standing directly under the machine, players can stand against the step in the boss room and begin firing the wire just before the claw is directly over them. There is also the chance, if the machine is low enough, of hitting it twice with one shot of the wire -- once on the way up, and again on the way back down.

Cossack and his daughter also appeared as playable characters in the Japan-only Wily and Light's RockBoard.