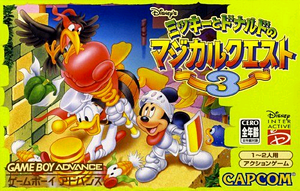 Disney's Magical Quest 3 starring Mickey & Donald is a platform game developed by Capcom. It is one of Capcom's licensed games based on Walt Disney characters. The game was the final game in the Magical Quest series, released for the Super Famicom and GBA only in Japan. Released late in the Super NES's life cycle, it was never released overseas until its Sega Genesis and Game Boy Advance incarnation.

The game is mostly similar to Disney's Magical Quest 2, but some new features are added. One of them is the possibility to play bonus games that are hidden in secret places.

The costumes for Mickey and Donald, this time, are different from each other. The first costume for Mickey is a knight armor that has a shield and a punch glove that can hit in different directions, but it easily sinks when it falls in the water; Donald uses a wooden barrel as an armor and a Metal Bowl for a Helmet, which can roll, uses a hammer that only attacks in an arc fashion, and can float when touching the water. Both costumes had a bar that fills over time. The strength of the attack (glove or hammer) depends on how much the bar has filled.

The second costume involves using lumberjack climbing gear; both characters use a rope to catch enemies and throw them or latch in certain columns. the only difference is that Mickey lashes the rope in a straight lateral direction while Donald throws from up to bottom.

The third and final costume is more different; Mickey is a magician that attacks with magical birds that fly straight forward. Donald uses a magic lamp that summons a genie's hand that can shoot magic or serve as a platform so that Mickey can step on it.

In this game, Donald's triplet nephews Huey, Dewey and Louie—who do not wear their traditional colors—play a prank on their uncle and hide in the attic in the hope that he might calm down. They are, however, caught inside a magical book, which is controlled by King Pete. After discovering this, Mickey and Donald enter the book in order to find the duckling brothers and stop the evil Pete once more. In the ending, Pete renounces his evil ways upon being defeated and becomes good.

Like the previous entry in the series, the Capcom staff members involved are merely credited by their company. This is somewhat rectified by the GBA version, which offers some staff members who may have been involved with the original version.

Retrieved from "https://capcom.fandom.com/wiki/Disney%27s_Magical_Quest_3_starring_Mickey_%26_Donald?oldid=131928"
Community content is available under CC-BY-SA unless otherwise noted.