Disney's Aladdin is a platform game developed and published by Capcom for the Super Nintendo and designed by Shinji Mikami. It is based on the Disney full-length animated motion picture of the same name. 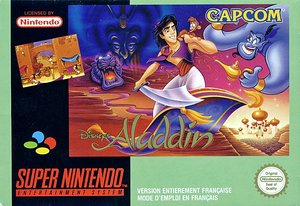 Unlike the Sega Mega Drive version of the game, the player does not equip a scimitar. Instead, the gameplay revolves around jumping on enemies, as well as vaulting off stumps to reach otherwise inaccessible areas, though like the Genesis version, the player can also throw apples to stun opponents.

The storyline more or less closely follows the plot of its namesake, the Disney full-length animated motion picture, with Aladdin going from a street rat to a prince, who first woos, and then has to rescue, the Princess Jasmine. Most levels and stages of the game will be readily recognized by people who have seen the motion picture, but there are a few levels that have nothing to do with the movie—including an Egyptian pyramid and a surreal world where Genie—dressed in a tuxedo—serves as Aladdin's guide (this level represents Genie's song sequence "Friend Like Me", and has an instrumental version of that song playing in the background).

The game features renditions of the soundtrack from the Disney motion picture, as well as several mini-games dependent on the player catching a golden scarab or collecting all diamonds within a stage. An extra challenge involved finding 70 red diamonds throughout the game. While they weren't necessary for ending the game, the credits screen changes slightly according to how many diamonds were collected. This version sold over 1.75 million units worldwide.