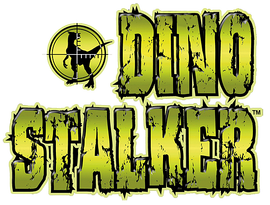 Dino Stalker (Gun Survivor 3: Dino Crisis in Japan) is a horror light gun shooter game developed by Capcom Production Studio 3[1] and published by Capcom. It was released exclusively for the Playstation 2 on June 27, 2002. It is considered the third game in the Dino Crisis series of horror games. Though it can be played by other means, a light gun is recommended, as the game was one in a number of Capcom games that tried to bridge the gap between light gun games and traditional games that allowed the player greater range of control over their movements in the game. The game's story focuses on Mike Wired, a World War II pilot, who after being shot down during combat over the Atlantic, is transported into the dinosaur-populated future from Dino Crisis 2.

Dino Stalker is a first-person shooter in which the player must use various weapons to defend against dinosaurs while progressing through the game. Dino Stalker supports the optional use of the GunCon light gun accessory. The player can use a variety of weapons throughout the game, including bazookas, machine guns, and shotguns, but can only carry one weapon at a time. The game takes place across various landscapes, including desert and jungle. A two-player mode is unlocked upon completion of the game.

The game focuses on the central character Lt. Mike Wired, who is caught in an intense plane fight during World War II. With nowhere to go, Mike appears to be doomed until he is suddenly teleported into the sky in another dimension, and must defend himself against an army of flying Prehistoric predators.

When he makes it to the main land, he sees more dinosaurs and must battle them single handedly with whatever weapons he can acquire. He hears a voice on his new wrist communicator, telling him to find a girl called Paula. When he does find Paula, she simply replies with "Trinity" before more dinosaurs appear. Trinity is actually a dinosaur with significant intelligence. It can send other dinosaurs to attack the player, as it does during a boss fight. In order to win the boss fight with Trinity, the player must shoot Trinity while it quickly dashes around a broken time gate.

Eventually, Mike sees Paula is trapped in a ravine and is able to save her. After they escape in a jeep through an empty town, it is revealed that the man talking to Mike is actually Paula's father Dylan Morton, the male protagonist from Dino Crisis 2.

The finale takes place inside a volcano, filled with red hot lava and one very large Tyrannosaurus which the player must defeat. After the fight is over, Mike gets sent back to his own time, in the same plane fight he was in at the beginning of the game. A rival plane shoots his down, and as he parachutes out, bullets are shown about to hit Mike right before Paula teleports the bullets elsewhere, and Mike is rescued by men on a boat, realizing that Paula was the one who saved him.

Due to the plot, Dino Stalker serves as a semi-sequel to the events of Dino Crisis 2.

Dino Stalker received "mixed" reviews, according to video game review aggregator Metacritic.[2] On release, Famitsu gave the game a score of 30 out of 40 in Japan.[3]

Douglass C. Perry of IGN criticized the game's controls: "After the first mission, your hand is in pain. The Carpel Tunnel syndrome you didn't have before throbs in fiery extended agony as if to say hello, and you have just started. [...] In the dozen-plus levels you play through, the slow-paced, awkward control is not only annoying but it hurts you. [...] But at least there is some comic relief, and for the pure sake of flat-out lunacy, this game may be worth your while." Perry also criticized the game's poor graphics, writing that it "looks like it was designed as a PlayStation game and that it only recently made the transition to PlayStation 2. [...] It's an average looking game at best, and that's putting it nicely."[4]

Ryan Davis of GameSpot called the game's premise "bizarre and convoluted" with "not a lot of coherence." Davis criticized the game's selectable control schemes. Playing exclusively with the GunCon 2, Davis wrote that "using a single hand to move and shoot is difficult and will wear out your arm more quickly than your average light-gun game." Davis also criticized the alternative method of using a standard DualShock controller: "the targeting reticle is far too sensitive, and you'll often find yourself dealing with bouts of overcorrection while trying to draw a bead on a dino." Davis noted that the best option was to utilize both the DualShock and the GunCon 2 simultaneously, "But even this configuration does not compensate completely for the game's inherently slow movement or the inability to look up or down, and you'll spend an equal amount of time-fighting the controls as you will fighting dinosaurs." Davis also criticized the game's poor graphics, and wrote that the only notable sound effect throughout the game "is the 'reload' command you'll hear whenever you're out of bullets, and this is only because the computer voice noticeably mispronounces it." Davis concluded that the game would have been "infinitely more playable had Capcom discarded the Gun Survivor control scheme and just left the movement control on rails, like all other light-gun games. But with its needlessly frustrating control scheme intact, Dino Stalker's appeal is incredibly limited. Though the game is loosely affiliated with the Dino Crisis games, there's not a lot here to draw fans of that series, and with several superior light-gun games available on the PlayStation 2, there's little reason for anyone without a masochistic streak to play this game."[5]

Louis Bedigian of GameZone praised the music and graphics and wrote that the control scheme "isn't bad, but it does take some getting used to. It's worth getting used to though, because this is the best dino-hunting game I've played since Dino Crisis 2."[6] Tom Bramwell of Eurogamer called it "easily the best yet" in the Gun Survivor series, and praised the game for "some stunning environments," but criticized its short length and some of the "rather bland" dinosaur designs.[7]

Paula
Add a photo to this gallery

Futabasha Guidebook
Add a photo to this gallery