Dino Crisis (Dino Kuraishisu (ディノクライシス?)) is a survival horror and action-adventure video game series created by Shinji Mikami and owned by the video game company Capcom. The plot focuses on multiple characters and their roles in recurring outbreaks of deadly dinosaurs and other monsters in a closed environment such as a laboratory on an island. The series also includes comic books and associated merchandise.

The first Dino Crisis game was directed and produced by Shinji Mikami, and developed by a team that would later become part of Capcom Production Studio 4.[2] It is a pseudo-sequel to Mikami's popular Resident Evil series, which Mikami and his team wanted to move away from the fantasy elements of and make something more real. He cited The Lost World: Jurassic Park and Aliens as influences, and liked dinosaurs because they were large, strong, fearsome, and violent.[3] The game was developed and marketed as "panic horror" as opposed to the "survival horror" branding of Resident Evil. It was made to have more consistent fright, with the dinosaurs being more intelligent, quick, and able to chase the player room-to-room.[3] Mikami described Resident Evil as "horror in the fun house" and Dino Crisis as more visceral horror akin to riding a roller coaster.[4]

For several years fans have been asking for a new installment in the Dino Crisis series.[5] In 2014, rumors began circulating that Capcom had begun development on a fourth main installment.[6][7][8] On March 30, 2014, Phil Spencer (the then-new head of Xbox) was questioned about whether or not rumors that Dino Crisis 4 would be released on Xbox One were true, to which he responded "We aren't working on DC, it would have to be another publisher if it were true."[8][9]

On January 11, 2016, it was reported that Tao Weishi (the producer of Monster Hunter Online) was interested in working with Capcom on a revival of the Dino Crisis series.[10][11] Shinji Mikami has also stated that he has long held ideas for a new game in the series.[12]

In March 2017, Capcom's Masachika Kawata said he was not aware of any internal plans to revive the series despite it being a good prospect for remasters or remakes.[13] In December, the official Twitter account for Capcom's lead development team responded to a fan asking if a new Dino Crisis title would release soon, to which they replied: "if a lot of people wish."[14][15]

A six-part manhua based on Dino Crisis (恐龍危機) was published in Hong Kong. It is a loose adaptation of the first Dino Crisis game, it was published by the Hong Kong-based company Jade Dynasty (玉皇朝). The series was produced by Tony Wong (黄玉郎).

Regina has also appeared in the tactical role-playing video game Namco × Capcom, beginning on a cruise ship from Gun Survivor 4 (Resident Evil: Dead Aim),[16] and as a card in SNK vs. Capcom: Card Fighters Clash. In Resident Evil 3: Nemesis, the player can unlock her outfit with a red wig as a bonus costume for Jill Valentine.[17] Annie also cosplays as Regina in Super Ultra Dead Rising 3 Arcade Remix Hyper Edition EX Plus Alpha, a downloadable content for Dead Rising 3.[18] A figure of Regina was released by Yujin in the Namco × Capcom series.[19] In November 2019, Capcom filed for a Dino Crisis trademark.[20] 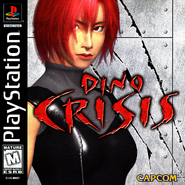 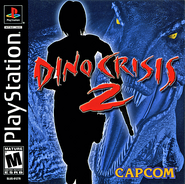 5th Anniversary Box Set
Add a photo to this gallery

Retrieved from "https://capcom.fandom.com/wiki/Dino_Crisis_(series)?oldid=137788"
Community content is available under CC-BY-SA unless otherwise noted.