Dick Gumshoe, known as Keisuke Itonokogiri in Japan, is a police detective from the homicide division who appears in the first three games in the Ace Attorney series as the main police detective. In the fourth case of the fourth game, he is only seen during a flashback trial.

He is often the head detective overseeing the cases that Phoenix Wright is involved in, and provides evidence and his opinion both during the investigation phase and while on the witness stand during the trial phases. During trials he is usually the first witness called to the stand, giving an overview of the crime and presenting evidence that they have gathered.

Gumshoe has a strong loyalty to Miles Edgeworth. He is very sensitive, often leading to his feelings getting easily hurt, but he is also a very optimistic and hard-working person.

Gumshoe has a penchant for getting involved in complicated murders, and he uses his powers of persuasion to get in charge of those cases. Unfortunately for him, he is often bumbling and has had his pay cut many times, such that he lives on instant noodles (though he tries to diversify his diet when he can). He still maintains a good working relationship with most of the force, and uses it to prevent himself from losing his job. 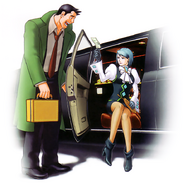 Younger Gumshoe in Ace Attorney Investigations: Miles Edgeworth
Add a photo to this gallery
Retrieved from "https://capcom.fandom.com/wiki/Dick_Gumshoe?oldid=128085"
Community content is available under CC-BY-SA unless otherwise noted.