Devil May Cry is a series of dark fantasy-themed 3D hack & slash action games, developed by Capcom and created by some notable former Capcom staff members such as Hideki Kamiya, Atsushi Inaba and Shinji Mikami. The games mainly centers on mercenary Dante and his goal of avenging his mother's murder by exterminating demons.

At first intended to be another entry in the Resident Evil franchise, the original Devil May Cry installment has been cited as the beginning of a subgenre of third-person action games called "Extreme Combat"[1] (other alternate names includes "Extreme Action" or "Stylish Action"[2]). This subgenre is also known as "3D hack & slash" or "character action game" and is considered a part of the beat 'em up genre.[3]

The series has been a marketing success with the first three games selling multiple million copies and being awarded the "Platinum Title" award by Capcom. The success of the series has led to the creation of various media adaptations and merchandise, including comic books, novelizations, two animated series, guides, collectibles, publications, and a variety of action figures. The game series currently consist of five main games, three "special editions", one reimagining game developed by another company and an HD compilation of the first three games. As of June 30, 2021, the Devil May Cry series has sold 24 million units[4] and is currently Capcom's fifth most successful intellectual property.[5]

The gameplay consists of heavy hack and slash combat scenes in which the player must attempt to extend long chains of attacks while avoiding damage in order to exhibit "stylish" combat; this element along with time and amount of items collected and used are taken under consideration when grading the player's performance. In later games, the system was slightly modified so players had to actively vary the attacks used, so as to maintain the style rank. The style rank is tracked during combat with letter grades, from worst to best: D, C, B, A, S. They are also represented by words that start with the first letter of the class, "Dull" for D for example. The third game introduced "SS" and "SSS" ranks, which continues in the fourth. Each level, or "mission", is also ranked using these letters.

The game also features some puzzle-solving and exploration elements retained from its survival horror beginnings, but these are downplayed; Devil May Cry games put emphasis on action.

The Devil Trigger ability enables the player's character to transform into a devil-like form with additional powers based on their current weapon, while the character's strength and speed increase and health is slowly restored. The first three games also eliminated the need to reload or reserve ammunition.

Each game in the series has added new elements to the gameplay.

Devil May Cry introduced the 'style' meter and ranking, encouraging players to attack and evade continuously while avoiding damage.

Devil May Cry 2 introduced the ability to perform combination attacks in mid-air and an evasion button. It also introduced a weapon-change button, so the player could cycle through ranged weapons without switching to the inventory screen.

Devil May Cry 3: Dante's Awakening added a selection of gameplay styles, allowing the player to focus on their favorite techniques or weapons, whether it be swords, guns, evasion or defense. Each of the four basic styles gain experience points, which unlock more techniques and abilities without costing 'red orbs', the common currency of the series. A second weapon-change button was added, allowing the player to cycle through the character's melee weaponry as well.

Devil May Cry 4 brings one major innovation in the form of main character Nero's "Devil Bringer" arm, which gives players the ability to pull distant enemies in to be attacked, or smash them into the ground. Nero is also armed with a sword that can be "revved" up via a throttle handle, allowing players to precharge the sword for extra damage on the next hit, or with precise timing it can be charged after each attack, for extra damage and style. Players can also switch fighting styles in mid-combat.

In 1998, after the completion of Resident Evil 2, preliminary work on a PlayStation 2 installment of the Resident Evil series began under the direction of Hideki Kamiya and Atsushi Inaba's development team, referred as "Team Little Devil". Early research and development work included a trip to Spain to examine various castles as a basis for the game's environments. However, in prototype status, it proved to be a radical departure from the established Resident Evil formula and the survival horror genre in general. Rather than abandon the project entirely, the premise was changed and it eventually became Devil May Cry.

The Divine Comedy, a well known fiction work by the Florentine poet Dante Alighieri, is one of the major inspirations behind the Devil May Cry series, it is often referenced or used as a background throughout the games.

Although the series is substantially different from its original Resident Evil inspiration, its lineage is still apparent, from the recurring boss characters and tendency towards grotesque adversaries, the need to solve elaborate puzzles to proceed, to the "This Game Contains Scenes Of Violence And Gore" warning at the opening sequence and "You Are Dead" game over screens. The violent finishing moves some monsters can perform are also reminiscent of its lineage.

Some of the major gameplay elements were partially inspired by a bug found in Onimusha: Warlords. During a test-play, Kamiya discovered that enemies could be kept in the air by slashing them repeatedly, which lead to the inclusion of juggles by gunfire and sword strikes in the original game.[9] According to Eurogamer, Capcom's 1989 arcade game Strider has been cited as a vital influence on the Devil May Cry franchise,[10] and according to Retro Gamer, the over-the-top action of Devil May Cry draws from Strider, particularly in their inclusion of the "boss rush".[11]

Kamiya, now working at PlatinumGames, has expressed interest in making a remake of the first installment as well as a crossover game featuring Dante and Bayonetta,[12] the titular protagonist of PlatinumGames' series of 3D action games.

The series' current director, Hideaki Itsuno, has also expressed interest in making a sixth main installment in the future.[13]

There have been multiple printed adaptations of the series. Two Devil May Cry light novels written by Shinya Goikeda and illustrated by Shirow Miwa have been published, first in Japan in 2002 and later translated and released in the United States in 2006. The first, entitled Devil May Cry Volume 1, was published in Japan in conjunction with the release of the first game and depicts Dante in an adventure set prior to the events of the game. The second novel (entitled Devil May Cry Volume 2 in the U.S.), was published in Japan to coincide with the release of the second game and takes place after the events of the first game. Publisher Tokyopop released the books in the United States in June and November 2006, respectively.

Three issues of a comic adaptation of the first game were published by Canadian publisher Dreamwave Productions in 2004, but the series was left unfinished when the company went bankrupt in 2005.[14] On July 25, 2008, both WildStorm (a DC Comics’ imprint) and Capcom announced that they are joining to create a new Devil May Cry comic book series. Details on the new comic series, including creative team and launch month, were meant to be announced at a later date[15] but to date, no new information has been announced since then.

Two volumes of a planned three-part Devil May Cry 3 manga series have been published in Japan and the United States. Taking place a year before the events of Devil May Cry 3, the manga tells the story of how the characters came to be where they are at the start of the game.

On March 7, it was announced that a tie-in manga titled "Devil May Cry 5 Visions of V" would be serializing on electronic Japanese manga hosting site, LINE MANGA (LINE マンガ).[16] The manga's illustration is Tomio Ogata. The prologue chapter was published ahead of the serial release and began updating every other Sunday starting on April 27, 2019. The manga is only available Japan and LINE MANGA can only be access within Japan due to regional access.[17][18][19]

An anime series entitled Devil May Cry: The Animated Series debuted on the WOWOW TV network in Japan on June 12, 2007. The series ran for 12 episodes.[20] The show was produced by the anime studio Madhouse and was directed by Shin Itagaki. Bingo Morihashi, one of the writers for the third and fourth games, was one of the writers on the show.

In November 2018, animation producer Adi Shankar announced he had acquired the rights to produce a Devil May Cry animated series. Shankar has been completing a similar animated series for Konami's Castlevania franchise, and he said that he would consider both series would be part of a shared "bootleg multiverse".[21]

On February 28, 2011, it was announced that Screen Gems, the company responsible for making Capcom video game series Resident Evil into a film series, had purchased feature film rights to the Devil May Cry series.[22] It has been stated that Kyle Ward will be writing the script for the film. It has also been confirmed by Capcom at E3 2011, that the film would be based on the new game, DmC: Devil May Cry, though Dante's look will stay more true to his classic self. The film is being positioned as an origin story for Dante.[23][24][25]

In August 2015, Capcom produced a collaborative stage play with the Devil May Cry series and Sengoku BASARA series titled "Sengoku Basara vs. Devil May Cry". In the play, Dante, Lady, Trish, and Vergil come across some mysterious historical ruins while chasing after a devil, and are sent back in time to Japan's Warring States era. There, the group meets Date Masamune, Sanada Yukimura, and other characters from the Sengoku BASARA franchise. The play ran the AiiA 2.5 Theater Tokyo for 18 performances from August 20–30. Masanari Ujigawa directed and composed the stage play with Hideaki Itsuno and Izaki Matsuno collaborating on the scenario. Kazushi Miyakoda and Tetsuya Yamaura produced the play with Hiroyuki Kobayashi and Makoto Yamamoto as supervisors.[26]

In March 2019, a musical stage play titled "Devil May Cry: The Live Hacker" ran for 13 performances from March 1–10 at Zepp DiverCity in Tokyo and featured live music elements. Jun Yoriko directed the play and wrote the script, and is also in charge of video.[27] The play was also released on DVD at the end of August.[28] 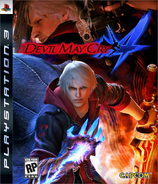 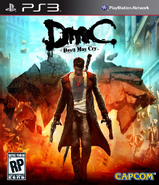