Start a Wiki
Delta Red (デルタレッド, Deruta Reddo?) is a fictional special force in the Street Fighter series of fighting games. It is the SIS Special Operations Unit that Cammy is a part of.

Delta Red is a special force with headquarters set in the United Kingdom. The group is active in a wide range of fields, including searching criminals on a global scale, protecting important people, maintaining security, and reconnaissance. Only the most elite of soldiers are selected to join Delta Red, and each team is made up of four to five members. Personnel includes about 3500 people. The Delta Red logo is an upside down red triangle. While the women wear green costumes, the males of the team wear dark blue.

Delta Red appears in Cammy's storyline in Street Fighter IV. In the beginning, Colonel Wolfman briefs Cammy on her mission when she was supposed to be on her day off from duty. He drives a van while briefing Cammy about the mission. In her ending, the team are at an unknown location, presumably at a lava-infested area. They were standing on a ledge of the cliff near the lava infestation. Cammy tells the Colonel that she disobeyed orders by destroying the BLECE data on the computer following a near disturbance by C. Viper. Colonel Wolfman said that he was monitoring her every movement during the mission. With a thumb up, Colonel Wolfman quoted to Cammy "Well done". 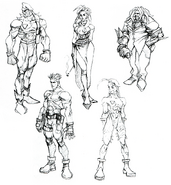 Street Fighter V profile artwork
Add a photo to this gallery
Retrieved from "https://capcom.fandom.com/wiki/Delta_Red?oldid=125874"
Community content is available under CC-BY-SA unless otherwise noted.