Deis has blue hair and a snake-like lower torso, similar to that of a Naga. An immortal creature, she appears in both Breath of Fire and Breath of Fire II as the same individual, unlike Ryu and Nina. In Breath of Fire III, Deis first wakes up in fully-human body, but later reappears in her usual serpentine form.

Regardless of her long lifespan, she is childish, irresponsible, somewhat of a pervert, and above all, lazy.

As shown throughout the series, Deis has a tendency to pick on most of the Nina incarnations. It is unclear as to why she does so. It may be because she feels that Nina is the competition for her in magic and beauty. In Breath of Fire II, upon recruiting her when traveling by sea is possible, Deis almost immediately belittles Nina as an inferior magic user compared to her. In addition, some of the party members remark that she seems to pay extra attention to Ryu. Similar to some of the other Breath of Fire games, this causes Nina to show a tinge of jealousy in the aspect that Ryu may be paying more attention to Deis for the time being.

As the story progresses however, Deis' attitude towards Nina will change to a more respectable level; especially after her witness of Nina's unselfish willingness and courage to offer herself as the sacrifice to become the Great Bird so that the party can have a chance at restoring balance to the world.

Deis is a stubborn character, showing a bit of arrogance due her status as a Endless (the race of ageless powerful creatures). She often calls people by nicknames rather than their names (such as referring to Nina as "little birdie" and Cray as "kitty". She also annoyed by how humans depend on gods for everything, summoning them to solve all their problems rather than trying to work by themselves.

After being trapped for so long inside the armor (Ershin) that she so much dislikes (which she often refers as "tin can"), Deis just wants a new (and "good looking") body to serve as a medium so she can enjoy the simple pleasures of life: eating and sleeping.

Bleu (Deis) is rumored to have fought alongside the unnamed Light Dragon Clan warrior who sealed the Goddess Tyr many years before the story began at the end of the Goddess War, since then she has slept in the mystical wandering city of Wisdon.

The party seeks her aid when the Empire attempts to use its new weapon against Prima.

Ryu and his party must go find her at Wisdon where they must awaken her. She is guarded by Wisps who challenge Ryu and his friends to fight to see if they are worthy enough for Bleu. Bleu initially helps the party by giving them an egg to hatch a creature that will smash the Dark Dragon Clan's navy, but after a bit of pleading, Bleu agrees to accompany the party.

Bleu is headstrong, flamboyant, and arrogant with a penchant for insulting the other party members. She has been asleep for so long that she has forgotten her powerful ancient magic. Despite her shortcomings, Bleu is a knowledgeable and important ally who helps the party time and again on their journey to stop Zog and the Dark Dragon Clan.

Bleu is an optional secret character, adding herself to the party if the player should seek her out.

During the Brood War, Deis was one of the few who protested against the slaughter of the Brood, who were decried as evil incarnate by her sister Myria. Deis soon earned the ire of Myria, who ordered her champions, the Guardians, to imprison Deis beneath Angel Tower, where she would rest with the Brood she sought to protect. Myria herself would rewrite history to portray her sister as a wicked witch who aided the evil Brood.

Deis is rescued from her imprisonment 500 years after the Brood War by the team, and through a careful choice of words when meeting her in her shrine, she becomes a master. She, herself would take the team to the other land, but due to her being imprisoned for 500 years, most of her abilities have yet to return. So she instead gives Ryu the ability to guide the way through a sphere of light. She then requests to be left alone for a while.

The team cannot gain her as a Master without choosing the right answer to her question ("I like you better this way."), otherwise she won't be an available master. After meeting her the first time in her shrine, you cannot reenter to talk to her for a while. It is only after you use the boat for the first time can you aquire her master abilities.

Later, after the defeat of Myria, she appears, and it is indicated that the two die together. She refers to Myria as her younger 'sister', which explains why Deis is so stringent in her fight against her, and why she lives as long.

Deis describes herself as being summoned, in the same manner as Ryu and Fou-Lu, from another world. In her case, the incarnation did not include a physical body, forcing her to inhabit the armor, which refers to her as Ershin. Due to people mistakenly believing the armor is referring to itself in the third person, and Deis herself disliking the name, the name Ershin is given to the armor.

With help of a temporary medium known as Rhem, she helps Ryu and the party to contact the other dragons, until she eventually returns to the armor where she can be more useful in combat and also help to keep the armor alive for a little longer.

Deis shows up in Chapter 8, in the Rezen Mountains. 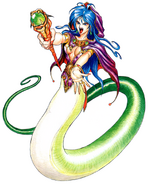 Breath of Fire art of Bleu in battle

Breath of Fire GBA portrait
Add a photo to this gallery
Retrieved from "https://capcom.fandom.com/wiki/Deis?oldid=139687"
Community content is available under CC-BY-SA unless otherwise noted.