Dee Jay is a character in the Street Fighter series of fighting games. He made his first appearance in Super Street Fighter II as one of the four "New Challengers".

Dee Jay wears orange loose drawstring pants with black sides and yellowish-white lettering that reads "MAXIMUM" and orange sparring gloves. His hairstyle is a braided mohawk, with a letter "M" cut on each side of his head; these letters were absent from his appearance in the Street Fighter IV series. Dee Jay is also seen in the anime movie and some artworks with a Caribbean chain necklace.

Dee Jay's pants originally said "MANTIS" but since his right sprite is merely a mirror image of his left, the "N" and "S" would be reversed, so it was changed to "MAXIMUM".

Dee Jay is generally a kind-spirited, cheerful, happy-go-lucky man who loves fighting, dancing and composing music rhythms. His conduct is very clear in most of his in-game poses, artworks and pictures where he is always seen sporting a huge smile and a thumbs-up hand gesture. Dee Jay is rarely seen without a smile; such rare moments include the Street Fighter II series loss portraits, and loss by time over in Street Fighter Alpha 3. Dee Jay tends to always see the positive side of everything in life, constantly displaying a highly happy mood and rarely getting upset, angry or sad, even under the worst circumstances. However, despite this laid-back attitude, Dee Jay does not tolerate belligerents who make trouble at his performances, literally kicking them out if necessary.

Dee Jay is the only character in the series to be designed by Capcom USA. He was designed by James Goddard, who modeled Dee Jay after martial arts film star and Tae Bo creator, Billy Blanks. Dee Jay's braided mohawk also resembles Blanks's role as Khan in The King of the Kickboxers. His name is also a pun on the word DJ (disc jockey).

Known as "The Southern Comet", Dee Jay is a cheerful kickboxer who fights to musical rhythm. Quickly rising to the top of his division, he travels the world looking for new challenges. In his in-game storyline, he anonymously challenges and defeats Adon, another kickboxer in the rival Muay Thai style, with Adon vowing revenge. He eventually finds his true goal: Sagat, the "emperor" of Muay Thai, now fallen from grace and an enforcer for M. Bison, who does not take the cheerful Jamaican seriously. Countering by declaring that in this fight he "means business", Dee Jay challenges Sagat and defeats the former champion, further adding to Sagat's depressed losing streak.

Sagat's employer, Bison, takes an interest in Dee Jay at this point, offering him a position in Shadaloo. Dee Jay refuses, and when Bison deals with the rejection by trying to kill him, Dee Jay staves Bison off and leaves, unable to truly defeat the dictator while the Psycho Drive is operational. Dee Jay returns to Jamaica and, inspired by his battles, hums a new tune as he walks down the street. This catches the ear of a record producer, who immediately offers Dee Jay a record deal.[4]

Now a major music sensation, Dee Jay enters the second World Warrior tournament to find some new rhythm for his next album. Though how far he gets in the tournament is unknown, he finds the rhythm he seeks and his new record is a smash hit.

Dee Jay's story role is minimal; feeling restless, he takes a break from his music to test his fighting skill by participating in S.I.N.'s tournament. Soon, footage of him fighting one of the Seth dolls is broadcast around the world.[5] At some point, he encounters and fights Rufus, apparently because the latter has an interesting "rhythm" in his voice and belly.

During the events of the game Dee Jay is traveling the world to record a new album.[6]

Dee Jay made a small guest-appearance in Street Fighter II: The Animated Movie. Here, he beats up a few punks causing trouble at a nightclub before being warned by Guile and Chun-Li that he is being spied on by Bison. In his scenes he uses a golden Caribbean chain necklace.

In the 1994 live action movie, Dee Jay is portrayed by Miguel A. Nunez Jr. Here, he is one of the minions of M. Bison and appears to have an aptitude for working with computers (at one point near the ending, he utters to himself "Oh, mon! I should have stayed at Microsoft"). Though competent, he is also portrayed as cowardly, abandoning Bison as he is giving a speech about accepting defeat. Dee Jay is often paired up with Zangief on-screen, where he plays the "straight man" based on his reactions to Zangief's uninformed and/or stupid comments.

Later, he and Sagat escape from Bison's base via a waterway located beneath the temple-base along with a case full of cash. To their disappointment, they find the case is actually full of worthless Bison Dollars, the currency which Bison intended to establish as part of his new nation.

Dee Jay also appeared in the Street Fighter 1995 cartoon but his role is minimal. He serves as the team's helicopter pilot. Even though the cartoon follows the movie closely, Dee Jay and Balrog's personalities were switched during production. Dee Jay was a greedy computer expert in the film, while in the cartoon, he is a friendly and capable fighter (and he isn't seen using computers). Yet, in "Demon Island", he is shown to be quite easily angered (a trait that fits more with Balrog) and he also seems to have his own gym in the episode.

In the UDON comics, Dee Jay appears as a Shadaloo agent, but it is revealed that he had been brainwashed along with Blanka. He is later freed from his brainwashing by Delta Red, and is seen sparring with Blanka and helping Delta Red finding out more information on Shadaloo and their next plains as a way to repay them for freeing him from Bison

Unfortunately, he and Blanka is recaptured by Bison and Shadaloo and is brainwashed into being their pawn once more, but Dhalsim uses his powers to free him from mind control, making M. Bison see Dhalsim as a potential threat, after the island that the tourmnant was on had sinked into the ocean and everyone was free from Shadaloo and their brainwashing, Dee Jay returned back to his home country with a new desire, he wanted to make himself and his music popular, at some point, his music had become so popular that other famous bands thoughtout the country wanted to join his group.

Dee Jay is a charge character. As such, he has a good variety of defensive options. His Double Rolling Sobat allows him to approach an opponent while discouraging a ground-based counter. Jackknife Maximum and Machinegun Upper can be used as both an anti-air and a combo finisher.

Dee Jay fights using kickboxing, a popular martial art in most of the world. Dee Jay, however, sees it as a form of dancing (similar to Elena's views on Capoeira). 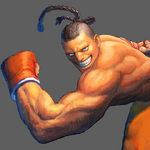