David King is above all else a quiet worker, who doesn't talk much about his past. He is "a man of few words". With sharp eyesight and deft movements with his knife, he knows his way around a fight. A skilled mechanic as well as a plumber, David can fix or build almost anything, and provides the ragtag band of survivors with a variety of makeshift weaponry.

David's past is never discussed within the game. His Special Items hint that he was once a juvenile delinquent, perhaps explaining his prowess with knives. Other Special Items suggest he is possibly a Native American, that he collects weaponry and tools, and/or that he is self-reliant to a fault.

David is fascinated by Japanese history and culture, especially in relation to strength and "Bushido", also known as the "way of the warrior." He likens himself to a lion: strong, adaptive, resilient, fierce and dominant. His pride in this comparison is displayed through his clothing, tools and equipment.

David gets along well with Alyssa Ashcroft, but doesn't care all that much for George Hamilton, whom he regards as somewhat snobbish. For some reason, he and Cindy Lennox don't seem to get along with each other.

During the Outbreak, David wears his grubby beige plumber jumpsuit with brown shoes and a tool belt. He has two unlockable outfits. His "Club Scene" threads (from Outbreak) consist of a dark jacket over a white A-shirt and blue pants. Here, his hair is tied back in a ponytail, whereas his "Real Survivor" look (from File 2) has his hair loose, hanging down almost to his shoulders. Strangely, he is only dressed in blue jeans.

(Outbreak and Outbreak: File # 2) - David's repair kit includes nine pieces of Vinyl Tape, twelve Monkey Wrenches, a Folding Knife and three sets of Spare Parts. The Folding Knife can be equipped as a weapon and used in David's Knife Combo attack. The Monkey Wrenches are also used in another of David's special actions, but he carries a limited number per scenario. The Spare Parts can be used three times per scenario to fix a broken item, such as a Broken Handgun or Broken Shotgun. Vinyl Tape can be used nine times to combine certain items into homemade weapons, as listed below:

(Outbreak: File # 2 only) - The words "J's Bar" are inscribed on the lighter. David can use the Lighter to ignite Molotov Cocktails, or turn a can of Pesticide Spray into a Flame Spray. The Lighter can also be used to read special graffiti in several locations during the "Underbelly" scenario. 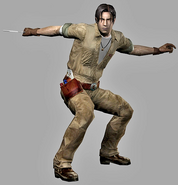 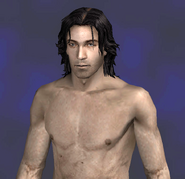 "Real Survivor" Alternate Outfit
Add a photo to this gallery
Retrieved from "https://capcom.fandom.com/wiki/David_King?oldid=132590"
Community content is available under CC-BY-SA unless otherwise noted.