Darkstalkers Resurrection, known as Vampire Resurrection (ヴァンパイア リザレクション, Vanpaia Rizarekushon?)[1] in Japan, is a fighting game developed by Iron Galaxy Studios and published by Capcom. It is a compilation of Capcom's two classic 2D fighting games in the Darkstalkers series, Night Warriors: Darkstalkers' Revenge (1995) and Darkstalkers 3 (1997).[2][3] The game features HD visuals, online multiplayer, replay sharing, spectator mode, and in-game unlockables. It was released in March 2013 as a downloadable title on the PlayStation Network and Xbox Live Arcade.[4][5] Darkstalkers Resurrection recevied a positive critical reception, though the publisher claimed it has failed commercially.

Aside from the standard ranked and player matches, Resurrection also includes an online tournament mode.[6] The game adds HD filtering with multiple viewing options, YouTube replay uploads, eight-player lobbies and a tutorial mode which provides in-depth tips to the mechanics of the game.[4] Players who complete in-game challenges receive points which can be redeemed to unlock bonus content via the "Vault" system, including custom artwork by Stanley "Artgerm" Lau, concept art, videos, and other rewards.[4][7]

Darkstalkers Resurrection was announced by Capcom executive producer, Yoshinori Ono, during the Street Fighter 25th Anniversary panel at New York Comic-Con on October 11, 2012.[5][8] According to Capcom USA senior vice president Christian Svensson, Resurrection had been in development for about a year before its announcement.[9] When the time to decide whether Night Warriors: Darkstalkers' Revenge or Darkstalkers 3 would receive the HD treatment arrived during planning cycles, Resurrection producer Derek Neal revealed that his team was "agonizing over which to release."[2] Due to the divide in the community's preference between the two titles, Capcom opted to release both instead as a dual pack.[2] Neal stated that games would be left unchanged in terms of balance and priority with the intention of remaining faithful to the original arcade versions.[7][10] In December–January 2013, Capcom ran the "Embrace the Dark" character creation competition.[11]

Darkstalkers Resurrection received universally positive reviews, resulting in the averaged ratings of more than 80% at both GameRankings and Metacritic for both platforms. However, Svensson announced that while the game had appeared in digital bestseller top ten lists, it has not managed to sell enough copies to be considered commercially successful.[14] 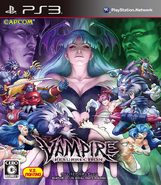