Darkstalkers Chronicle: The Chaos Tower is a compilation of the Darkstalkers fighting games released in 2004 for the PlayStation Portable system. It is a port of the Japan-only 2000 title Vampire Chronicle for Matching Service. Character art was done by Arnold Tsang.

The Chaos Tower features characters from all prior games, the movesets, play styles and soundtracks from every game in the series, and it also allows players to challenge each other over the Internet.

It also feature one new stage, "Chaos Tower". A new "Tower" mode was also featured in single player mode. The player has to go to the top of the tower (100th Floor. Pyron, level 8, 4 health bar) where artwork can be unlocked from all of the previous Darkstalkers games. 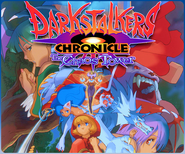