Darkstalkers 3, titled in Japan as Vampire Savior: The Lord of Vampire (ヴァンパイア セイヴァー The Lord of Vampire, Vanpaia Seivā Za Rōdo Obu Vanpaia?), is a 2D fighting game developed and published by Capcom, and the third and currently final proper main installment (not counting compilations or ports) in the Darkstalkers series of fighting games. The game was first released in 1997 for the arcade systems, and later ported to the Sega Saturn (only in Japan) and to the Sony PlayStation in 1998. Artwork was mainly handled by Akiman, but promotional and in-game demo artwork was handled by Bengus.

The game retains the character roster of Darkstalkers: The Night Warriors, omitting Donovan, Huitzil and Pyron from the lineup. Taking their place were four new characters: Jedah, Lilith, Q-Bee and B. B. Hood. It also features a secret character/mode, Shadow, where the player assumes the identity of the defeated character for the next fight (e.g. if Morrigan is defeated, the next fight the player will play as Morrigan).

Vampire Savior eschews the traditional round-based system in favor of what is dubbed the "Damage Gauge System": battles take place during a single round, with each fighter having two life bars (by default) and corresponding life markers. Similar to Rare's Killer Instinct, when one fighter loses a life marker after the life bar is emptied, the fighters reset their positions as if starting a new round but in contrast to a traditional fighting game where the life bar resets after each round, the victorious fighter retains their remaining life bar. When the player is attacked, some of the health lost is displayed in white, which can be recovered if the player doesn't take damage.

The game also introduces the "Dark Force System" which uses a bar of super meter to allow players to perform special abilities unique to each character for a limited period. The PlayStation version separates Dark Force into 2 modes from which the player chooses before each match: "Dark Force Change" is the same as the traditional Dark Force mode, whereas "Dark Force Power" is an enhanced mode that takes 2 bars of super meter and the player can inflict damage that is not recoverable (but will also take non-recoverable damage). In Dark Force Power, the player can still activate their special enhancement but they have to press a unique button combination rather than it being tied to whether or not the player is in Dark Force mode.

Jedah, one of the high nobles of Makai, is resurrected after a premature death long ago. Seeing the state of the demon world, he decides that the only way to save the world is to recreate it. To this end, he conjures a dimension known as Majigen, to which he summons worthy souls to feed his new world. As luck would have it, those souls belong to the characters from the first two games, in addition to three newcomers.

Darkstalkers 3 (Vampire Savior) was first released in Japanese arcades in 1997. The game was originally planned to be released as Darkstalkers: Jedah's Damnation outside Japan, but this title was never used, while the chosen title was also used for the U.S. arcade release.

A Sega Saturn version was released in Japan only in 1998, which required Capcom's 4MB RAM cartridge. This version contains all 15 characters from the original Vampire Savior as well as the three Night Warriors characters who were left out of the original arcade release and brought back in Vampire Savior 2/Vampire Hunter 2. Thanks to the 4MB RAM cartridge, this version more faithfully reproduces the 2D-animation fluidity of the arcade than either of the earlier console releases. However, while Shadow is available in the Saturn version, Marionette is not.

Also in 1998, an update of the game was ported for the PlayStation as Vampire Savior: EX Edition in Japan and Darkstalkers 3 in North America and Europe. Although it is an EX version to the third canon game in the series, it is actually a compilation of Vampire Savior and its two Japan-only arcade updates. This version allows players to use all 18 characters and the two "hidden characters" (Shadow and Marionette) in all three games. It also features Oboro Bishamon and Dark Talbain as playable characters. The game also contains all three intros and endings (all endings for all characters as well as a new special ending that players can unlock by beating Oboro Bishamon). But due to the RAM limitations of the Playstation, a few animation frames had to be removed (reduced), making the gameplay somewhat awkward and choppy.

The game was included in Vampire: Darkstalkers Collection, a compilation of all five Darkstalkers arcade games that were released in Japan only for the PlayStation 2 in 2005.

In 2012, the ESRB administered a Teen rating for Darkstalkers 3 as a PSone Classic for the PlayStation 3 and PlayStation Vita.[3] The game was released through PlayStation Network on April 24, 2012.[4]

It was also included in a remastered form as part of the HD remix game Darkstalkers Resurrection for the PlayStation Network and Xbox Live Arcade. Unlike the previous release for this game on the PSN which used the PS1 version, the remastered edition is based off the original arcade release with added features like Online Multiplayer.

Several licensed tie-ins were released for the game in Japan:

Although it was overshadowed by other fighting games at the time, Darkstalkers 3 was positively received. GameSpot's Jeff Gerstmann hailed it as "easily the best fighter Capcom has put out in years" and noted it is "very well animated," even on the PlayStation, and "has an excellent soundtrack, and the character voices are all terrific."[7] IGN's Randy Nelson described the "surprisingly fluid and animated" as well as "fast, fun, and surprisingly balanced" Darkstalkers 3 as "an exceptional effort from Capcom on a gameplay and technical front" and one of the best 2D fighting games on the PlayStation.[8]

Retrospectively, GamesRadar's Lucas Sullivan included Darkstalkers 3 among other lesser-known fighting game classics deserving HD remakes in 2012, stating that "the game’s crisp spritework is a marvel to behold – especially in the backgrounds, which convey the kind of creepy atmosphere that compliments the supernatural fighters perfectly."[9] Matt Edwards of Eurogamer opined that "playing it today [in 2013] is akin to playing Third Strike - not because these games are mechanically similar, but because Capcom tends to go the full distance with the second sequel."[10]


NOTE: The credits for this version found in the EX Option Mode in the PSX (aka EX) version of Darkstalkers 3 are updated for one name: Takashi Kitamura (Moe・T) becomes Takeshi Kitamura (Moe・T), which is the correct spelling of his name 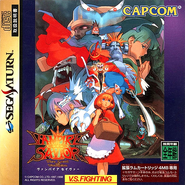 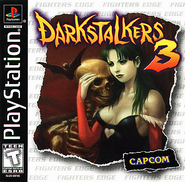 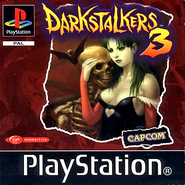 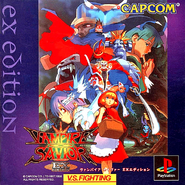