Dai Gyakuten Saiban 2: Naruhodou Ryuunosuke no Kakugo (大逆転裁判２ -成歩堂龍ノ介の覺悟-; lit. "Great Turnabout Trial 2: The Resolve of Ryūnosuke Naruhodō") is an visual novel mystery adventure game developed and published by Capcom for the Nintendo 3DS.[1] It is the sequel to Dai Gyakuten Saiban: Naruhodō Ryūnosuke no Bōken, the prequel spin-off game to Capcom's Ace Attorney series of visual novel legal mystery adventure games and the eleventh installment overall in the series. Like its predecessor, it is directed by series creator Shu Takumi, with Kazuya Nuri handling art and Yasumasa Kitagawa composing the soundtrack. However, Motohide Eshiro have been added to the team as the producer. The game was announced at the Tokyo Game Show 2016 on September 17[2] and was released on August 3rd, 2017 in Japan.

Dai Gyakuten Saiban 2 takes place six months after the first game, near the the end of Japan's Meiji period. Although Susato Mikotoba returned to Japan in the first game, she ends up meeting Ryūnosuke Naruhodō again. It is implied in the announcement trailer that Dai Gyakuten Saiban 2 would tie up all the loose ends and lingering questions introduced in the previous game.[3]

On July 7th, 2017, Capcom announced that the game had gone gold and celebrated with a trailer.[4]

Dai Gyakuten Saiban 2: Naruhodou Ryuunosuke no Kakugo was released on August 3rd, 2017 only in Japan. Later that same, an "Special Edition" consisting of the game and its predecessor was released. 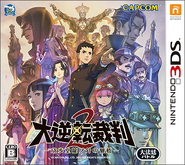 Box art.
Add a photo to this gallery