Cut Man (カットマン, Kattoman) is a character from the Mega Man series. He first appeared as one of the first six (eight in Mega Man: Powered Up) Robot Masters from the original Mega Man game.

Created to be a timber-felling robot, Cut Man was built by Dr. Light and reprogrammed by Dr. Wily. He is playable in Mega Man: Powered Up and Mega Man Soccer. Cut Man is found to be somewhat formal, as he addresses other robots as "Mr.". He has also appeared in Mega Man 8 as a mini boss in the Sega Saturn version. He has another cameo in Mega Man X8 as a hidden boss in Optic Sunflower's level. His scissors are made of "ceramic titanium", a fictional metal. In later games, he can use scissors in his hands and shoot beams.

"The first industrial robot created by Dr. Light. Taking into consideration the fact that he would mostly be working outdoors, Cut Man was designed to withstand any type of weather. Cut Man's cutter is made of Ceramic Chitin, a very special material that boasts high durability as well as a resistance to rust and varying temperatures. There are anti-slip surfaces on his hands which allow him to catch his Rolling Cutter as it returns to him. Cut Man's high mobility is balanced out by his weakness to strong physical impacts. Though his main purpose is to harvest wood, he is also capable of processing lumber. A little hot-headed at times, Cut Man is not the most logical robot out there, but his intentions are good and pure."

Cut Man is in every episode of the Mega Man cartoon series along with Guts Man. Originally intended for logging operations, Cut Man now is used as an agent of evil by Dr. Wily. Although his Rolling Cutters are deadly, Cut Man also isn't too bright and usually loses battles to Mega Man and even Roll.

His Net Navi counterpart, CutMan.EXE, appeared in MegaMan Battle Network. In the anime MegaMan NT Warrior, there are seven CutMan.EXE, six are brothers and one is their grandfather. Even so, the CutMan brothers are considered comic reliefs in the series. They are depicted as bumbling morons. 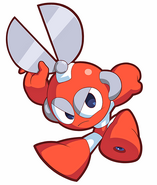 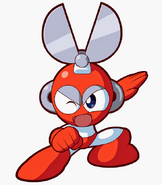 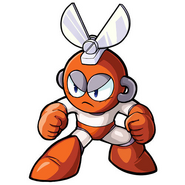 Street Fighter × All Capcom
Add a photo to this gallery
Retrieved from "https://capcom.fandom.com/wiki/Cut_Man?oldid=124924"
Community content is available under CC-BY-SA unless otherwise noted.