The Crow are enemies from the Resident Evil series of survival horror games.

During the initial viral outbreak in the Arklay Mountains, as well as in the later outbreak in Raccoon City, most of the crows were immediately infected with the T-Virus after eating an infected creature.

An infected crow is larger than a regular crow, and will immediately attack any living creature that wanders into its territory. One in a group may be startled by the player's sudden presence and take flight, prompting the others to do so and attack. However, an infected crow is not as sensitive to loud noises as their regular counterparts. They can be tricky enemies to draw a bead on with a gun and connect with a shot. 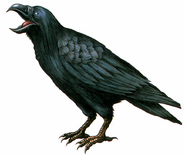 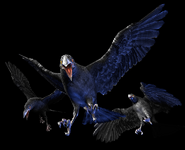 Resident Evil Outbreak
Add a photo to this gallery
Retrieved from "https://capcom.fandom.com/wiki/Crow_(Resident_Evil)?oldid=132552"
Community content is available under CC-BY-SA unless otherwise noted.