Crimson Tears (クリムゾンティアーズ?) is a cel-shaded 2004 sci-fi beat 'em up game developed by Spike and DreamFactory and published by Capcom for the PlayStation 2.

The player may send one of three different mutanoids, each with different statistics, into a dungeon in order to ultimately reach the boss. Each dungeon has a varying number of levels, each of which can be attained by finding and using the transporter. A key card must also be located sometimes in order to get the transporter to function. Along the way, however, are many enemies to hinder the player's progress. While fighting (or even just moving around), the mutanoid's heat level will continuously rise, until it reaches its limit. At this point, a meltdown will occur, causing the character to enter a berserk-like state. The player may continue to battle like this, but if no Cooling item is used within the time limit, the meltdown will deplete health severely.

The game is set in Tokyo in the year 2049 and revolves around three characters whose home has been destroyed. As seen on the game's front cover, this trio seems human; however, they are actually bio-engineered weapons developed by a company named A.R.M.A. called "mutanoids". 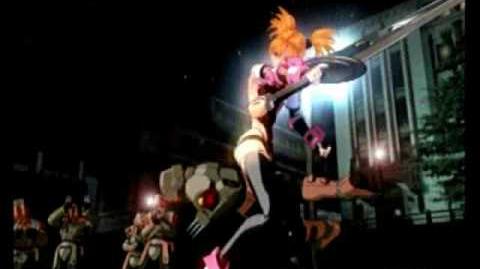