Dr. Wily created Crash Man with the combined special features of both Guts Man and Bomb Man, giving him a sturdy, armored body which could withstand any accidental explosions from his own bombs. His weapon, the Crash Bomber, is a timed explosive attached to a drill fixture. This allows the bomb to be affixed to its target. He has high agility for a robot, but is weak to the Air Shooter due to the fact that when he jumps, it can knock him off balance. The Air Shooter is the weapon Mega Man acquires by defeating Air Man.

Crash Man usually has a docile personality, but on the occasion he gets angry, he's inconsolable. He's very frank and forward, but clumsy with his hands (or lack thereof). He likes demolishing buildings and doesn't care for recycling. 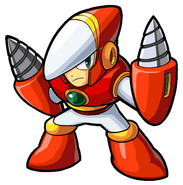 Street Fighter × All Capcom
Add a photo to this gallery
Retrieved from "https://capcom.fandom.com/wiki/Crash_Man?oldid=117575"
Community content is available under CC-BY-SA unless otherwise noted.