Code Name: Viper, Ningen Heiki: Dead Fox (人間兵器デッドフォックス, "Human Weapon: Dead Fox") in Japan, is a action platformer game made for the NES in 1989, which didn't come out in Japan until a year later.

The gameplay has been noted for being similar to Namco's Rolling Thunder. There are two floor levels to switch between, doors that the player must go into to get weapons and items, but there are some differences.

There are also people to be rescued. One of these hostages is a soldier who the player must rescue on every single level (except the last) in order to advance to the next level. The player may also expand the character's life meter, and there are some more obstacles in the game like springs.

Ken Smith is a special agent. Commander Jones sends him to South America to take down a drug cartel and rescue kidnapped hostages.

At the end of the game, Smith finds out that Commander Jones was behind the whole thing, and engages him in a fight to the death and as a result, Jones lost his life. While the underground drug routes where Jones was involved were destroyed by Smith, the syndicate he ran was not defeated.

This game lacks a credits sequence for the game's staff. Music composition is confirmed to be done in some capacity by Yoko Shimomura through her official website, though her worklist lists the title as one where her role was merely supportive. Aside from this one other credit is known: the first stage theme was done by Junko Tamiya, confirmed via interview. 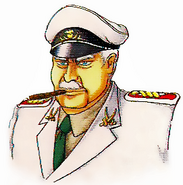 Enemies
Add a photo to this gallery

Japan
Add a photo to this gallery

Retrieved from "https://capcom.fandom.com/wiki/Code_Name:_Viper?oldid=129186"
Community content is available under CC-BY-SA unless otherwise noted.