Cindy Lennox is a character from the Resident Evil series of survival horror games. She is a playable character in the spin-off games Resident Evil Outbreak and Outbreak: File 2.

Cindy is the most popular waitress at J's Bar, due to her irrestibly bright smile and cheerful disposition. She's helpful, and always thinks of other people first. Being accustomed to the harsh realities of society, she never loses her cool - even in extreme situations.

Cindy tends to get along with everyone, even though Jim Chapman and Alyssa Ashcroft's constant whining may grate on her at times. Kevin seems to go to the J's Bar often, and the two seem to get along quite well despite his failed attempts at flirting. For some reason, she doesn't get along well with David King and vice-versa.

Her Special Items and reactions to situations portray Cindy as unapologetically girly and nice, fond of collecting stuffed animals, buying clothes, trying new beauty treatments, and gardening. Cindy is also the only character who never swears (probably due to her lady-like nature). Although she can raise her voice (such as her context sensitive text while under attack yelling "Excuse Me!" in an angry tone if her nearby ally isn't helping her).

During the Outbreak, Cindy wears her J's Bar uniform, consisting of a blue and white striped shirt with a blue low-cut vest and a medium length black pencil skirt with black high-heels. Cindy's skirt has a slit in the backside that helps her with movement, allowing her to run and climb ladders more easily due to the increased flexibility the slit allows her legs; if it weren't there, the skirt would slow her down much more.

Cindy, like the other main females Alyssa Ashcroft and Yoko Suzuki, has four unlockable Alternate Outfits: "On Vacation" and "Funny Bunny" from Outbreak, and "Nightlife" and "Coquette" from File 2.

To unlock and purchase three of these costumes, special items which are scattered throughout various scenarios at varying difficulty levels in both games must be found. To unlock "Coquette", players must first clear Elimination 2.

Cindy can be considered the medic of the team. Her special ability is a herb case, that hold more healing items (though not first aid spray) than even Yoko when considering her own unique backpack ability. Cindy's infection rate is also on the lower end in terms of how fast it rises compared to other characters. Similar to the other females Cindy's unique action is for avoidance purposes. Cindy simply ducks, while simplistic this action avoids most attacks in the game (including 1 hit kills) and can mean Cindy can avoid death where other characters such as Mark, Kevin, and even Alisa with her own ability would die.

The trade off is that Cindy doesn't excel on any physical stats. Her tackle is weaker than Kevin and Mark. Her run speed is among the slowest in the game, Cindy is rather slow when attacking with weapons, and she is one of the slowest pushers of heavy objects in the game. Cindy takes longer to ready, aim, shoot, and reload all manner of weapons too. Cindy also takes less hits before she can't stand up anymore without the aid of an ally. The AI Cindy avoids conflicts more than most characters in the game meaning that in either the playable or AI Cindy context she should have partners that can battle better than she can.

Cindy has the second lowest health value in the game at 1500. For reference this is just above Yoko who has the lowest at 1300 and Cindy has literally half the health Mark has at 3000. When dealing with bosses it is recommended Cindy do utility work such as activate context weapons such as the Train in the second scenario or only come in to heal more capable partners. Due to Cindy's very low infection rate Cindy players can afford to reach the "crawl" state a few times during a playthrough provided they either have a backup herb or an ally who can pick her up. Somewhat ironically when having to help two (or three online) Cindy is among the lowest in the list to pick up when she can't stand on her own due to most others having higher infection rate in the state, ironically the only character who might be lower on priority is Yoko, who has lower health but slower infection rate than Cindy herself.

Some monsters such as the Window zombie that appear in missions such as "Hellfire" and "Outbreak" and Gamma Hunters are very dangerous hazards for Cindy. Arguably Cindy could be the most vulnerable character in the game to these enemies as while Yoko has 200 lower health her avoidance ability allows her to crawl away from the major hazard while Cindy's simply ducks. Even if Cindy successfully avoids the Window Zombie with her duck due to the always active attack and Cindy getting back up without moving means the grab is simply delayed rather than avoided. Cindy gets about 2 more total frames (assuming 100% "fine" health) than Yoko to mash out and escape before being taken away. The Gamma Hunter can pick up Cindy at an orange "caution" state rather than the red "danger" state and initiate his eating sequence compared to the male characters and Alyssa due to higher HP where they need to be in Danger before the eating begins. As these two death sequences bypass the "crawl" state of too much damage Cindy does not benefit from the decreased infection rate compared to other characters, these deaths also deny survivors of the chance of taking the useful items Cindy might have died with on her corpse. 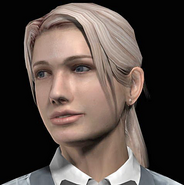 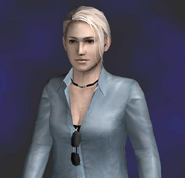 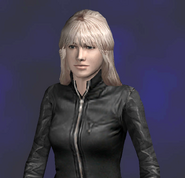 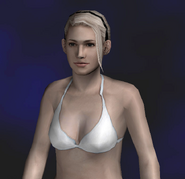 The contents of the "Herb Case"

An injured Cindy shooting at a Zombie.

Cindy with a shotgun.

An injured Cindy being shouldered by Kevin and helped away from a hostile Zombie.

Cindy's case starting inventory in Outbreak.
Add a photo to this gallery
Retrieved from "https://capcom.fandom.com/wiki/Cindy_Lennox?oldid=138696"
Community content is available under CC-BY-SA unless otherwise noted.