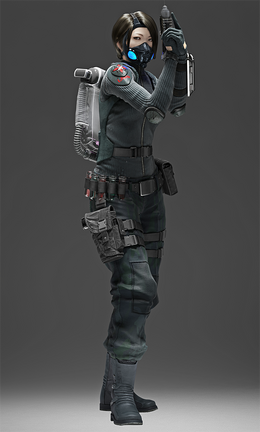 "FOUR EYES" has been dedicated to science since she was a child. As a result, she did not develop the social skills needed to operate successfully in later life. She is detached from normal human emotions, seeing people merely as breeding grounds for her singular love: virology.

This particular branch of science is the sole reason that Four Eyes is part of the U.S.S. Her motivation is that this is the best place for her not only to study some of the deadliest outbreaks in the world, but to experiment with some of Umbrella's own cutting edge viral breakthroughs.

Four Eyes has no compunction when it comes to gathering and experimenting on live human subjects, and on many missions she has been discovered experimenting on the wounded, and often on captives. This has occasionally proven to be detrimental to the ongoing mission. However, her practical knowledge of virology use in the field is unparalleled.

Retrieved from "https://capcom.fandom.com/wiki/Christine_Yamata?oldid=106251"
Community content is available under CC-BY-SA unless otherwise noted.