Chiyomaru is the head of the resistance fleet while Tessan is his guardian. The resistance forces' mission is to find and destroy the doomsday weapon created by the Weapon's Brain: G.O.D. The two were once part of Earth Corps until they left to form the resistance. Chiyomaru pilots the P-10033 GAITS. 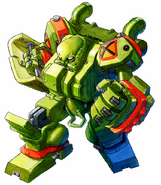 P-10033 GAITS
Add a photo to this gallery
Retrieved from "https://capcom.fandom.com/wiki/Chiyomaru_and_Tessan?oldid=116612"
Community content is available under CC-BY-SA unless otherwise noted.