Chill Penguin (or Icy Penguigo in Japanese) is a boss character from the Mega Man series of action platformer games.

Chill Penguin is an Maverick designed to resemble a penguin in most of the Mega Man X games. There was strong animosity between Chill Penguin and Flame Mammoth. He could be considered one of the easiest Mavericks.

Chill Penguin's sprite is aqua and yellow only. He behaves like the one in his first appearance.

In Mega Man Xtreme, his weakness is Speed Burner.

In Mega Man Xtreme 2, he appears as a boss in Boss Attack mode.

In Mega Man Maverick Hunter X, Chill Penguin has a speaking role in the game and his voice actor is Dean Galloway (he also voices him in the quarter minute movie, The Day of Σ), the voice actor of Dr. Wily in Mega Man Powered Up. He still behaves like his first appearance, except Vile can defeat him using Wild Horse Kick. 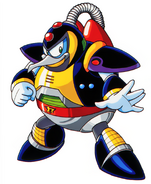 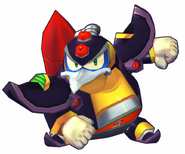 Mega Man Maverick Hunter X
Add a photo to this gallery
Retrieved from "https://capcom.fandom.com/wiki/Chill_Penguin?oldid=137157"
Community content is available under CC-BY-SA unless otherwise noted.