Chaos Legion (カオス レギオン?) is a third-person hack and slash game developed and published by Capcom, released in 2003 for the PlayStation 2 and PC. It is based on Tow Ubukata's novel of the same name. The light novel released on February 20, 2003 and ended on December 20, 2004.

The story of Chaos Legion is a gothic opera which begins November, 791 A.S. (Anno Satanis): the protagonist, Sieg Wahrheit, is a Knight of the Dark Glyphs who is on a quest under command of the Order of St. Overia to find his former friend, Victor Delacroix, who has stolen the forbidden book "Apocrypha of Yzarc", and to stop him from releasing the evil spirit Azrail, who would destroy the three planes of existence: the Nether World, the Middle World, and the Celestial World.

The gameplay is primarily action-oriented. Numerous enemies attack the player in waves, and progress to the next part of the stage often requires defeat of all enemies in the area. The main feature that lends originality to the game is the addition of the "Chaos Legion", which are supernatural creatures that fight alongside the player. While legions are summoned, Sieg Wahrheit (the player character) is unable to run and has weaker melee attacks. Legions can be controlled to a degree: their tactics can be switched between offensive and defensive, and players can issue orders for them to attack immediately. While the legions are inactive, Sieg can perform a sort of special attack called an Assist Attack which causes a legion to appear and attack with him.

In game, it is possible to increase the power of the legions at Sieg's command using experience gained in battle. There are 4 main areas for increasing a legion's power, namely :

In the beginning of the plot, Victor feels that Sieg was responsible for the death of his lover —and Sieg’s friend— Siela Riviere, three years ago (prior to the events in the story which take place in the mentioned time); and has the intent on bringing Sieg into a pure pandemonium that Victor himself has prepared as retribution, not only for the sins of Sieg alone, but for the sins of the whole world —referring to this Armageddon as the “Purification of the World”: whereupon he plans to use relentless hordes of hideous monsters to cleanse the world of sinners by obtaining the "Three Sacred Glyphs" and releasing Azrail.

During his quest, Sieg encounters a member of the "Maidens of the Silver" fighting a monster alone after other Maidens are killed. With Sieg’s help, Arcia Rinslet, the sole survivor, manages to escape death.

At first, Arcia mentions that the Maidens were in tough pursuit of Victor; thus, when she learns that Sieg is also searching for the same person, she decides to tag along. Later, it is revealed that Arcia has held a grudge against Victor for the murder of her brother.

Sieg never tells Arcia the intentions why he pursues Victor, even though he does say the two knew each other from before. Because of this lack of trust, Arcia briefly loses her faith in Sieg and sets off to find Victor alone. Sieg eventually catches up and subsequently teams up with her once more after he consoles her.

Sieg and Arcia meet Victor several times: each time to have a little more on information of Victor’s plan revealed, but unavailable of stopping him from obtaining the Three Sacred Glyphs.

Soon, Sieg and Arcia finally meet Victor in the “Hall of Chaos” —the place where Azrail has been sealed.

Victor decides to “punish” Sieg first: by killing Arcia —forcing her to do it with her own gun after gaining manipulation over her body— since it seems that she is close to Sieg. The murder fails, unbeknownst to Sieg, who lashes out and attacks Victor because he believes Arcia to be dead. After subduing Victor, Sieg learns that Arcia survives the shot, only to find that Victor is not fully defeated.

Surrounded in black aura, Victor attacks Sieg once again, but Arcia steps in between Sieg and Victor with her arms outstretched. Instead of killing her, Victor stops abruptly and regains his right mind; a flashback then takes place back in time, which reveals the truth of the past: Three years before, Sieg, Victor and Siela were instructed by the Order to reseal the demon Azrail —discovering in reality, that the Order planned to use Azrail’s power for world dominance, but realized that was too powerful to contain. The demon resisted and decided that, instead of being banished once more, it would possess a human: Siela; Victor tried to protect Siela, but was possessed instead.

In his uncontrollable rampage, he almost killed Sieg, but Siela withheld the mortal wound, and Victor drove his sword straight through, piercing her chest.

When he came back to his senses, he believed Sieg to had committed the murder. Siela’s dying words to Sieg, beforehand, were: “Take care of Delacroix…” —this being the reason why Sieg can’t directly kill his friend.

Back in the present time, Victor decides to end his own life, much to Sieg’s dismay —the only way to break Azrail’s seal is to kill the person who last created the seal or perform a secret ritual sacrifice described in the forbidden book, Apocrypha of Yzarc. Victor breaks the seal by sacrificing himself. Azrail is then released and fights Sieg, not only in its own diabolical form, but also re-spawned in the figure of a darkened, corrupted Siela to intimidate him. However, Sieg prevails.

After all the chaos, Sieg mounts a tribute to Victor and Siela, and mourns over the loss of his two best friends, but Arcia cheers him up and relieves him.

Sieg has the power to handle the Chaos Legion. The Legion is composed by seven legions, each one with their own abilities and characteristics:

The music and soundtrack of Chaos Legion is composed by Hideyuki Fukasawa. 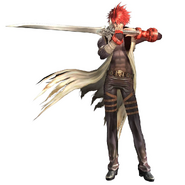 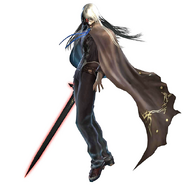 Siela Riviere
Add a photo to this gallery 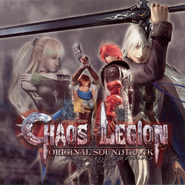 Light Novel Volume 1
Add a photo to this gallery

Retrieved from "https://capcom.fandom.com/wiki/Chaos_Legion?oldid=139101"
Community content is available under CC-BY-SA unless otherwise noted.