Spirit photos, teasing someone so they feel left out

Fighting techniques based on Saikyo Style Karate
The Chairperson, known as Iinchō (委員長, Iinchō?) in the Japanese version, is a character in the Rival Schools series of fighting games.

She is a calm, level-headed, responsible, and well-behaved person; but when alone, she is quite timid. Nevertheless, she is very popular and adored by boys and girls alike in their school. She, however, is not very skilled in hand-to-hand fighting. She has a strong motivation to reach her goals, and will take the initiative as much as possible. She is also cautious, so as to minimize risks in everything she does.

Her primary outfit is a short sleeve white blouse, black bloomers, white socks and sneakers. She has a red jersey jacket that covers on both of her shoulders.

She first appears in Hinata's ending in Rival Schools: United by Fate, notifying her that their classmates were inspired by Hinata herself into taking up martial arts. In the ending, Chairperson is referred to as Class Leader. The School Life Mode in the updated sequel, Nekketsu Seisyun Nikki 2 helps expand on her character a bit more.

In one of the Taiyo High storylines, she accompanies Hinata and Kyosuke after Batsu's brief disappearance following his defeat to the Seijyun High Team (Akira, Yurika, and Zaki). After Batsu returns to the party, she then tends to her wounded schoolmates and Hayato, who was also victimized by Kurow, who was disguised as Batsu's evil doppelganger named "Vatsu".

After the incident, Chairperson had a conversation with both Boman and Roy along with Tiffany and Ran. Afterwards, she, Ran, and Boman watch as the plane takes flight when Roy and Tiffany head back to the United States. Back at Taiyo High, she was saddened to hear and learn the news of Kyosuke's disappearance after the tragic death of his twin brother Hyo.

Most of the Chairperson's fighting techniques are based on karate, probably based on the fact that her schoolmate Hinata's participation in Batsu's search for his mother inspired most of their other schoolmates--herself as well--to take up karate. It is revealed that the Chairperson actually learned karate by mail from the infamous Saikyo Style branch, better known as Dan Hibiki's personal fighting style.

She does not have a high Air Launcher of any sort, nor does she have any special moves that can be used in the air. It is also of note that there is a considerable delay after she launches her opponent into the air, which can discourage players from doing an Air Combo using her. 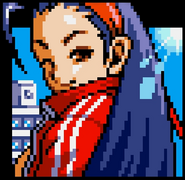