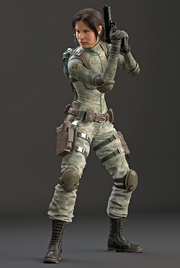 Caroline's early life was marked by poverty as she lived with her parents on the Cree/Ojibwe reservation in Montana - of which she was of Cree heritage. It was here that she developed specialist skills in speed and blending in to her surroundings.

She joined the Army straight out of school. She excelled at the intense curriculum of the SPEC OPS, establishing herself quickly among her peers. A perfectionist, she is hard on herself and will never accept failure. She continued to look to her people's spirits for guidance and mythical determination.

Caroline is highly skilled in knife combat, making her a valuable asset against the T-Virus creatures encountered during the mission.