Carlos Oliveira is a character in the Resident Evil survival horror games.

Carlos has short dark brown hair in a wavy style, with fringes in each side, and brown eyes.

In Resident Evil 3: Nemesis, he wears a black tactical vest with several pockets, an olive green sleeveless loose collared shirt as the collar itself was large, off-white pants with black knee pads and a holster on his right thigh and black combat boots. He also dons black fingerless gloves. This outfit later became his Nostalgia outfit in the 2020 remake version.

In Umbrella Chronicles, during Raccoon City's destruction scenario, Carlos' outfit had a minor color change, his sleeveless collared shirt was lime green and his pants were grey. His hair was also brown.

In the Resident Evil 3 2020 remake, Carlos' hair is black and no longer wavy, being styled in ragged curls, and he gains facial hair. His main outfit is similar to Chris Redfield's Lanshiang outfit in Resident Evil 6; an olive green tactical vest with several pockets, a black short sleeved undershirt with the logos of Umbrella in each sides of the sleeves, olive green cargo pants with black kneepads along with a gun holster on his right thigh and black combat boots.

Originally from a South American anti-government guerrilla group, his exact nationality is unknown, though he does have Native American ancestry. After government forces wiped out his former organization, Carlos was scouted out by the Umbrella Corporation to join the U.B.C.S. He joined up, and was assigned to Delta Platoon, Company A along with Nicholai Ginovaef, Mikhail Victor and Murphy Seeker.

Carlos was put in charge of handling heavy weapons, along with other duties such as local procurement, rear security and arms maintenance. His expertise in weaponry and vehicle operation made him a valuable asset. Despite his violent background, he is warm-hearted and known for joking around. Perhaps as a result of being raised amidst violence, he is brave and always willing to throw himself in the middle of danger.

In Resident Evil 3: Nemesis, Carlos meets and assists Jill Valentine throughout the game as the two of them attempt to escape Raccoon City. At one point, Jill becomes infected by the T-Virus after a battle with the Nemesis. At this point, Carlos becomes playable so that the player can prepare a vaccine for Jill. Ultimately, he is successful in escaping the city alive, along with Jill.

The events of Resident Evil 3 are revisited in the Resident Evil: The Umbrella Chronicles scenario "Raccoon's Destruction", in which Carlos is a playable character alongside Jill Valentine.

Jill, Carlos and Nemesis all appear trapped in a cartoon version of Raccoon City in Under The Skin. 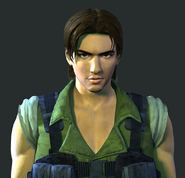 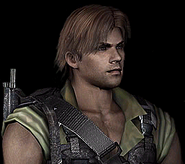 Concept art
Add a photo to this gallery
Retrieved from "https://capcom.fandom.com/wiki/Carlos_Oliveira?oldid=138988"
Community content is available under CC-BY-SA unless otherwise noted.