Captain Commando (キャプテンコマンドー, Kyaputen Komandō?) is a 1991 futuristic side-scrolling beat 'em up game developed and published by Capcom as a coin-operated video game, and later ported to several other platforms. It was the seventeenth title produced for the company's CP System hardware. The game stars the titular superhero, who was originally conceived as a fictional spokesman used by Capcom USA in the company's console games during the late 1980s,

[citation needed] and his three members of the "Commando Team" as they fight against a gang of super-powered criminals. Captain Commando is also included in Classics Collection Vol. 2 for the PlayStation 2 and Xbox.

Captain Commando follows the same gameplay established in Capcom's previous beat-'em-up Final Fight. The arcade version allows up to two, three, or even four players simultaneously depending on the game's settings. The player can select between any of the four "commandos" (Mack, Captain, Ginzu, or Baby-Head) as their character, with each player controlling a different character. The player's objective as usual is to move towards the end of each stage, defeat every adversary who gets in their way while avoiding any traps that they may throw at the player's way before eventually fighting the boss awaiting at the final area of each stage. The game consists of a total of nine stages.

The control configuration is exactly like Final Fight, with an eight-way joystick for moving the character left or right, as well as towards or away from the background, along with two action buttons for attacking and jumping. The player can perform numerous combination of attacks while standing or jumping, including grabbing the enemy, as well as a special attack by pressing the attack and jump simultaneously that will drain a portion of the player's vitality. An addition to the controls is the ability to dash by pushing the joystick left or right twice. The player can perform a running attack or even a running jump attack.

Like in Final Fight, the player can pick up health-restoring food items hidden inside barrels and other destructible objects to restore their vitality, as well as other bonus items to increase their score. Weapons also can be picked up, such as three different types of firearms, as well as shurikens that can only be used by Ginzu. Players also can ride certain robots by dismounting their riders and then jumping over the robot. The robots has their own vitality gauge and if they sustains enough damage, it will be destroyed. There are three types of robots in the game: a punching robot, a flame-throwing robot, and a freezing robot. Unlike Final Fight, weapons can be carried when the player makes the transition to a new area until the stage is completed.

It is the year 2026. Set in the crime-ridden future of Metro City, the world is filled with crime. Captain Commando and his three faithful Commando companions rise up to erase this crime from Planet Earth and from all the Galaxy. But the futuristic criminals they have to fight are endowed with a secret, hidden, evil power. Many of them are Super Criminals, with abilities beyond that of ordinary mortals. The leader of all Super Criminals is Scumocide (known as Genocide in Japan).

The origin of Captain Commando as a character predates his appearance in his self-titled game. In the packaging and manuals of many of Capcom's earlier titles for the Nintendo Entertainment System in North America released between 1986 and 1989, all of Capcom's games released for the NES between 1986 and 1988 (1942, Commando, Ghosts 'n Goblins, Mega Man, Trojan, Section Z and Gun.Smoke) were released as part of the "Captain Commando Challenge Series" and featured a drawing of the Captain on the back of the packaging, which depicted him as a "futuristic" space hero wielding a raygun on each hand and two large medallions around his neck with the letter "C" engraved on each. Each game's instruction manual also featured a "Special Message" from the Captain addressed to the owner of the game, congratulating the player for purchasing one of Capcom's products. Additionally the instruction manual for Section Z identified the otherwise nameless player character as being Captain Commando himself.

A revised version of the Captain Commando character appeared again in Capcom's NES lineup in 1989 (Strider, Mega Man 2, Willow, and DuckTales). The artwork on the rear packaging of those games featured an illustration of Captain Commando wearing a pilot suit in front of a fighter jet, holding a helmet under his right arm, with an alien chimp sitting on his right shoulder and the Capcom logo in an airbrushed style above them. The text above the artwork featured a message from the Captain advising the reader to "look to (him) for up-to-date reports for all the exciting action games from Capcom", followed by the Captain's apparent handwritten signature.

Scumocide
Add a photo to this gallery 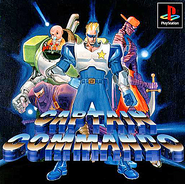 PlayStation (Japan)
Add a photo to this gallery

Gamest magazine
Add a photo to this gallery

Retrieved from "https://capcom.fandom.com/wiki/Captain_Commando?oldid=137728"
Community content is available under CC-BY-SA unless otherwise noted.