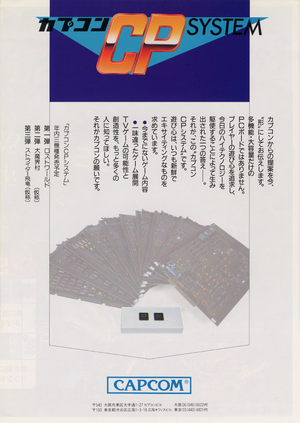 The Capcom CP System, abbreviated as CP System, CPS and CPS-1, is an arcade system board developed by Capcom in 1988 that ran game software stored on removable ROM cartridges. More than two dozen arcade titles were released for CPS-1, before Capcom shifted game development over to its successor, the CP System II.

Capcom's Street Fighter II series is perhaps the best known franchise within the CPS game library. The first three titles in the series (The World Warrior, Champion Edition and Hyper Fighting) were all developed on CPS-1 and highly successful.

After a number of arcade game boards designed to run only one game, Capcom embarked upon a project to produce an arcade system board that could be used to run multiple games, in order to reduce hardware costs and make the system more appealing to arcade operators.

The CPS hardware was also utilized in Capcom's unsuccessful attempt at home console market penetration, the CPS Changer, a domestic version of the CPS similar to SNK's Neo Geo AES.[1]

A year before releasing the CPS-2, Capcom released an enhanced version of the original CP System dubbed the Capcom Play System Dash, which had some features that would later be used in the CPS-2, such as the QSound chips.

The CPS Dash boards have four interlocking PCBs and are contained in gray plastic boxes. To combat piracy, "suicide batteries" were implemented, which power the volatile RAM which contained the manual configuration of the display hardware registers, as well as the priorities registers. The CPS-1 Dash 68000 code is not encrypted at all. If the batteries' voltage should drop below +2V, the registers manually defined in factory by Capcom in RAM would be lost, and the PPU would no longer have access to the hardware specific register set on the game used, rendering the game inoperable, and necessitating the operator sending the board to Capcom to be fixed, at his own expense. Unlike the CPS-2, CPS Dash sound ROMs were encrypted using "Kabuki" Z80s.

A home version of the CPS, the Capcom Power System Changer was released in late 1994 in Japan to compete against the SNK Neo Geo.[3] Capcom released the CPS Changer as an attempt to sell their arcade games in a home-friendly format. The CPS Changer adapter was basically an encased SuperGun (Television JAMMA adapter), and was compatible with most JAMMA standard PCBs. Capcom's "protection" against people using the CPS Changer on other arcade boards was the physical shape of the device. On a normal JAMMA PCB it would not attach firmly and tended to lean at odd angles, but it would work. The CPS Changer has outputs for composite video, S-video and line-level mono audio.

The CPS Changer featured Super Famicom controller ports, allowing the use of all Super NES controllers, including their six-button joystick, the "CPS Fighter".

All of the CPS Changer games used the CPS arcade hardware. The CPS Changer games were simply arcade PCBs in a special plastic shell suitable for home use. This concept was later re-used in the CP System II hardware. Some CPS1 games were changed slightly for home release, sometimes including debugging features or other easter eggs.[citation needed]

The CPS Changer was sold as a package deal of the console itself, one CPS Fighter joystick controller, and the Street Fighter II ′ (Dash) Turbo game for 39,800 yen. Additional games were sold for about 20,000 yen.

The final game for the CPS Changer was a back-ported version of Street Fighter Zero. Originally released on the CP System II hardware, this special CPS Changer version, released at a premium 35,000 yen, was degraded slightly for the older hardware.[citation needed]

Retrieved from "https://capcom.fandom.com/wiki/Capcom_Play_System?oldid=138297"
Community content is available under CC-BY-SA unless otherwise noted.