Capcom Fighting All Stars: Code Holder is a canceled crossover fighting game that was planned for the arcade and PlayStation 2.

The life system was 3-tiered: if the player lost one tier, a break moment would occur and then the fight would resume, much like the life system in The Night Warriors. However the life system was also linked to the power bar: for each tier lost, a character gained an additional level in the Super Combo gauge (at full life, a character only has single-level super combo moves). Super arts were handled in three tiers, each super costing one, two, or three levels to use them.

The game had a time limit, and depending of how long the player took to finish the game, the ending would vary.[1]

Originally, Capcom Fighting All-Stars was planned to be a 2D sequel to Capcom vs. SNK 2: Mark of the Millennium 2001, before being converted to 3D. However, due to SNK's financial troubles and restructuring, the title was redesigned as a Capcom-only crossover with twenty former SNK members designing it.[3]

The game was Capcom's first attempt at creating an in-house 3D fighter, after the success of their Street Fighter EX series (which was produced by Arika). Capcom beta-tested the game but after negative feedback from players and more months in development, the game was canceled in August 2003.

According to an interview with former The King of Fighters director Toyohisa Tanabe, a secret character from Tanabe's old company (SNK) was set to be playable in Capcom Fighting All Stars.[4][5]

While the game never received an official release, the idea of Capcom's own characters in a crossover game would be instead used in a 2D fighting game Capcom Fighting Evolution, released in 2004. One of the original characters slated to debut in All-Stars, Ingrid, would appear in Capcom Fighting Evolution and later on in Street Fighter Alpha 3 MAX for the PlayStation Portable.

Capcom later revisited the concept of 2D fighters in 3D with the more traditional Street Fighter IV and Tatsunoko vs. Capcom.

In August 2016, new info and images for the game were added on the Street Fighter V encyclopedia site, including new unreleased posters (some made by Shinkiro, the artist who drawed the promotional arts from Capcom Fighting Evolution and Tatsunoko vs. Capcom) and the full reveal of the final boss Death (who was for many years only seen as a silhouette in one of the game flyers).[2] 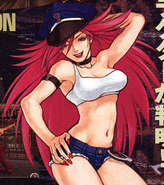 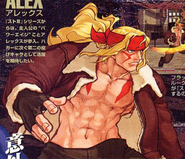 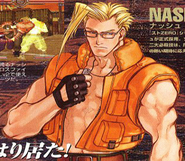 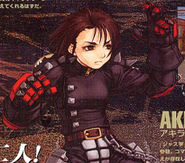 Symbols of the 3 code holders 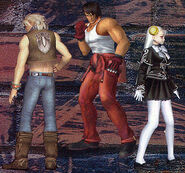 Player 2 outfits
Add a photo to this gallery

Retrieved from "https://capcom.fandom.com/wiki/Capcom_Fighting_All-Stars:_Code_Holder?oldid=141596"
Community content is available under CC-BY-SA unless otherwise noted.