Capcom Beat ‘Em Up Bundle, known as Capcom Belt Action Collection (カプコン ベルトアクション コレクション) in Japan, is a collection game published by Capcom for the PlayStation 4, Xbox One, Nintendo Switch and Steam. As the title suggests, it is a bundle of beat 'em up games developed by Capcom. The bundle was officialy annouced at September 13th 2018 and was released digitally on September 18 the same year.[1] A physical release occurred in December for PlayStation 4 and Nintendo Switch.

Capcom Beat ‘Em Up Bundle features seven classic beat 'em up games, two of which makes their debut on a home console system. All games have co-op support where players can play with friends locally,[1] and online support to play with people around the world. Players can also play the Japanese versions of the games.[1] All games have unlimited continues.

As each game is composed of mostly retro content, different visual filters were added for retro enthusiasts such as scanlines, arcade filters, and sharpness tweaking.

Alien vs. Predator was considered to be part of the collection, but Capcom could not reach an agreement with 20th Century Fox (currently known as 20th Century Studios) to use the IP.[citation needed] 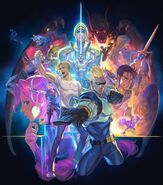