Two Super Famicom sequels with new improvements and options were spawned, the most significant being the inclusion of Beach Soccer. 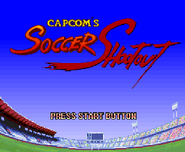 Title screen.
Add a photo to this gallery
Retrieved from "https://capcom.fandom.com/wiki/Capcom%27s_Soccer_Shootout?oldid=136914"
Community content is available under CC-BY-SA unless otherwise noted.