Capcom Database
Register
Don't have an account?
Sign In
Advertisement
in: Pages with reference errors, Articles with incomplete sections, Companies

Capcom Co., Ltd. (株式会社カプコン, Kabushiki-gaisha Kapukon?) is a Japanese video game developer and publisher[1] known for creating numerous multi-million selling game franchises, including Street Fighter, Mega Man, Darkstalkers, Resident Evil, Devil May Cry, Onimusha, Ace Attorney, Monster Hunter, and Dead Rising, as well as licensed games based on crossovers, or properties such as Marvel or Disney. Established in 1979,[2] it has become an international enterprise with subsidiaries in North America, Europe, and East Asia.[3]

Capcom's predecessor, I.R.M Corporation, was founded on May 30, 1979[4] by Kenzo Tsujimoto. Tsujimoto was still president of Irem Corporation when he founded I.R.M. Tsujimoto worked concomitantly in both companies until leaving the former in 1983.

The original companies that spawned Capcom's Japanese branch were I.R.M as well as its subsidiary Japan Capsule Computers Co., Ltd., both of which were devoted to the manufacturing and distribution of electronic game machines.[2] The two companies underwent a name change to Sambi Co., Ltd. in September 1981,[2] while Capcom Co., Ltd. was first established on June 11, 1983 by Kenzo Tsujimoto,[4] for the purpose of taking over the internal sales department.[5]

In January 1989, the old affiliate company Capcom Co., Ltd. merged with Sambi Co., Ltd., resulting in the current Japanese branch.[2] The name Capcom is a clipped compound of "Capsule Computers", a term coined by the company to describe the arcade machines it solely manufactured in its early years, designed to set themselves apart from personal computers that were becoming widespread at that time.[6] The word capsule alludes to how Capcom likened its game software to "a capsule packed to the brim with gaming fun", as well as to the company's desire to protect its intellectual property with a hard outer shell, preventing illegal copies and inferior imitations.[6]

While Capcom's first product was the coin-operated Little League from July 1983, its first real video game, the arcade title Vulgus, was released in May 1984.[2] Beginning with a Nintendo Entertainment System port of 1942 published in December 1985, the company started to venture into the market of home console video games,[2] which became its main business segment a few years later.[7] Its division Capcom USA had a brief stint in the late 1980s as a video game publisher for the Commodore 64 and IBM PC DOS computers although the development of these arcade ports were handled by other companies. Capcom has to date created 15 multi-million-selling game series, the most successful of which is Resident Evil.[8]

Capcom has been noted as the last major publisher to be committed to 2D games, though this was not entirely by choice. The company's commitment to the Super Nintendo Entertainment System as its platform of choice caused them to lag behind other leading publishers in developing 3D-capable arcade boards.[9] In addition, the 2D animated cartoon-style graphics seen in games such as Darkstalkers: The Night Warriors and X-Men: Children of the Atom proved popular, leading Capcom to adopt it as a signature style and use it in more games.[9]

In 1994, Capcom adapted its Street Fighter series of fighting games into a film of the same name. While commercially successful, it was critically panned. A 2002 adaptation of its Resident Evil series faced similar criticism but was also successful in theaters. The company sees films as a way to build sales for its video games.[10]

Capcom partnered with Nyu Media in 2011 to publish and distribute the Japanese independent (dōjin soft) games that Nyu localized into the English language.[11] The company works with the Polish localization company QLoc to port Capcom's games to other platforms,[12] notably examples are DmC: Devil May Cry's PC version and its PlayStation 4 and Xbox One remasters, Dragon's Dogma's PC version released in January 2016, and Dead Rising's version on PlayStation 4, Xbox One and PC released on September 13, 2016.

During their quarterly earnings call in August 2018, Capcom expressed an interest to explore the possibility of additional remakes and re-releases of their earlier IPs.[14][15]

On April 2nd, 2020, an employee had contracted the coronavirus (COVID-19) at Capcom's headquarters in Chuo-ku, Osaka. Capcom promised to work with health authorities to try and prevent any further spread.[16][17]

On 2 November 2020, the company reported that its servers were affected by a ransomware attack, scrambling its data, and the threat actors have allegedly stolen 1TB of sensitive corporation data and were blackmailing Capcom to pay them to remove the ransomware. By mid-November, the group began putting information from the hack online, which included contact information for up to 350,000 employees and partners of the company as well as plans for upcoming games, indicating that Capcom opted to not pay the group. Capcom did affirm that no credit card or similar financial information was obtained by the hack.[18]

In the first few years after its establishment, the Japanese branch of Capcom had three development groups referred to as "Planning Rooms", led by Tokuro Fujiwara, Takashi Nishiyama and Yoshiki Okamoto, respectively.[19][20] Later, games developed internally used to be created by several numbered "Production Studios", each assigned to different games.[21][22] Starting in 2002, the development process was reformed to better share technologies and expertise, and all of the individual studios were gradually restructured into bigger departments responsible for different tasks.[22] While there are self-contained departments for the creation of arcade, pachinko and pachislo, online, and mobile games, the Consumer Games R&D Division instead is an amalgamation of subsections in charge of various game development stages.[22][23][24]

In addition to these internal teams, Capcom also commissions outside development studios to ensure a steady output of titles.[26][27] However, following poor sales of Dark Void and Bionic Commando, the company's management has decided to limit outsourcing to sequels and newer versions of installments in existing franchises, reserving the development of original titles for its in-house teams.[28] The production of games, budgets, and platforms supported are decided upon in development approval meetings, attended by the company management and the marketing, sales, and quality control departments.[22]

Apart from the head office building and the R&D building of Capcom Co., Ltd., both located in Chūō-ku, Osaka,[3] the Japanese parent company also has a branch office in the Shinjuku Mitsui Building in Nishi-Shinjuku, Shinjuku, Tokyo.[29] It also has the Ueno Facility, a branch office in Iga, Mie Prefecture.[3]

In addition to the development and publishing of home, online, mobile, arcade, pachinko, and pachislot games, the company publishes strategy guides,[2] maintains its own arcade centers in Japan known as Plaza Capcom, and licenses its franchise and character properties for use in tie-in products, movies, television series, and stage performances.[7]

Suleputer, an in-house marketing and music label established in cooperation with Sony Music Entertainment Intermedia in 1998, publishes CDs, DVDs, and other media based on Capcom's games.[30] An annual private media summit called Captivate, renamed from Gamers Day in 2008, is traditionally used as a platform for new game and business announcements.[31]

On 4th January 2022 Capcom announced "Capcom Creators", a content creator program designed to "celebrate and connect with" fans of the company's titles. Creators who are part of the program will be granted access to newsletters that will highlight new games and content creation opportunities, as well as a dedicated private Discord server to connect with program managers and fellow creators. They'll also have the chance to have their work shared on Capcom's official social channels, and could receive extra exclusive incentives such as digital asset packs and care packages featuring "special merchandise".[32]

In 2012, Capcom came under criticism for controversial sales tactics, such as the implementation of disc-locked content, which requires players to pay for additional content that is already available within the game's files, most notably in Street Fighter X Tekken. The company has defended the practice.[34] It has also been criticized for other business decisions, such as not releasing certain games outside Japan (most notably the Sengoku Basara series), abruptly cancelling anticipated projects (most notably Mega Man Legends 3), and shutting down Clover Studio.[35][36][37]

In 2015, the PlayStation 4 version of Ultra Street Fighter IV was pulled from the Capcom Pro Tour due to numerous technical issues and gameplay bugs.[38] In 2016, Capcom released Street Fighter V with very limited single player content. At launch, there were stability issues with the game's network that booted players mid-game even when they were not playing in an online mode.[39] Street Fighter V failed to meet its sales target of 2 million in March 2016.[40]

Artist and author Judy A. Juracek filed a lawsuit in June 2021 against Capcom for copyright infringement. In the court filings Juracek asserted that Capcom had used images from her 1996 book Surfaces[42] in various parts of their cover art and other assets for Resident Evil 4, Devil May Cry and other games. This was discovered due to the 2020 Capcom data breach, with several files and images matching those that were included within the book's companion CD-ROM. The court filings noted one image file of a metal surface, named ME0009 in Capcoms files, to have the same exact name on the books CD-ROM. Juracek has sought over $12 million in damages and $2,500 to $25,000 in false copyright management for each used photograph from Capcom.[43] There is currently no date set for when the trial will commence. This comes on the heels of Capcom being accused by dutch movie director Richard Raaphorst of copying the monster design from his movie Frankenstein's Army into their game Resident Evil Village.[44] 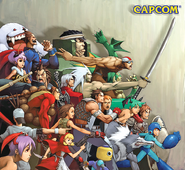 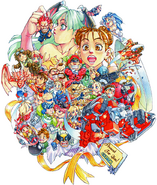 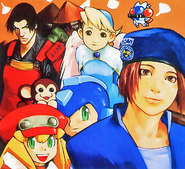