Cap-Bon! is Capcom's current official magazine in Japan, preceded by Club Capcom and CFC Style Fan-Book CAP!. Capbon, the magazine's official mascot can be taken into battle instead of a Felyne in Monster Hunter 4 through use of a code for a downloadable quest found in its September 2013 issue. Capbon appears to be some kind of green salamander-like creature. On the cover of the first five issues, Capbon can be located just above and to the left of the volume number. 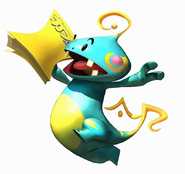 Capbon, the official mascot of the magazine
Add a photo to this gallery
Retrieved from "https://capcom.fandom.com/wiki/Cap-Bon!?oldid=102379"
Community content is available under CC-BY-SA unless otherwise noted.