Byakko is a fighting game character who first appeared in Plasma Sword, the second game in the Star Gladiator series.

A mysterious tiger-like humanoid alien who fights with Plasma Claws. Byakko is a skilled ninja and a member of The Four Saint Beasts (based on the Chinese constellations) which was created by the Union to foil Bilstein's plans. Byakko's mission is to destroy the source of the Plasma weapons and any wielder he meets.

Byakko is also suspected by Gantetsu to be the one who had decimated his troop in a past incident. Byakko's win quotes suggest that he has a Zen-like nature. If Byakko succeeds in his mission of defeating Bilstein, the Union will order Rai-on to execute him as he has become "too powerful" and a possible threat. Byakko escapes, saying he has much to live for and that he can't die just yet. 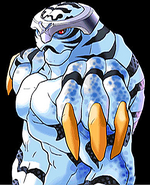 Byakko (middle rear) in an All-Star Group from Capcom Design Works
Add a photo to this gallery
Retrieved from "https://capcom.fandom.com/wiki/Byakko?oldid=123144"
Community content is available under CC-BY-SA unless otherwise noted.