Balloons bounce around a 2D stage, and it's up to the players to shoot them with spiked chains. As the balloons pop, they split into smaller balloons until they've all been popped. As the balloons become more numerous, it gets harder and harder to avoid them.

Additionally, Buster Bros, like many other games during this era of gaming, credited its staff in its default Score Ranking Table, which is as follows: 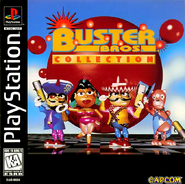