Brian Irons is a character from the Resident Evil series of survival horror games.

Brian is the Raccoon City's corrupt Chief of Police of the R.P.D., and appears only in Claire Redfield's half of Resident Evil 2. Claire first meets the Chief in his office (after destroying the rubble blocking the corridor) with the recently deceased body of Mayor Michael Warren's daughter on top of his desk. He later disappears from the office, after using his secret door to escape to the basement. He left his diary near the door, in which he described his desires to hunt down the Mayor's daughter and use her body as a stuffed trophy.

Irons was responsible for the deaths of at least several officers, when he went insane and hunted them like game. Additional documents also revealed that the character was previously convicted of sexual assault and had been taking bribes from Umbrella, particularly from William Birkin himself.

Claire confronted Irons one last time in a hidden room behind his office before he is killed, either indirectly because his body rejects the G-Virus (in the form of a chest-bursting parasite) or by being torn apart by the mutated Birkin. In either scenario, Irons is always in the same room after he dies.

Irons had taken personal offense of Umbrella for ruining his town.

Irons was arrested for two rape charges while he was a university student. He underwent psychiatric evaluation as a result of the charges, but was released due to circumstantial evidence as well as his phenomenal academic standing.

It is also heavily implied that he was a serial killer.

According to his finances, Irons had been accepting Umbrella bribes for five years before the Raccoon City outbreak. 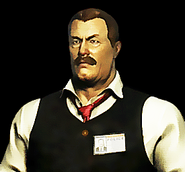 Resident Evil: The Darkside Chronicles
Add a photo to this gallery
Retrieved from "https://capcom.fandom.com/wiki/Brian_Irons?oldid=132523"
Community content is available under CC-BY-SA unless otherwise noted.