Breath of Fire (ブレスオブファイア, Buresu obu Faia?) is a series of role-playing video games developed by Capcom. The series, which is currently on hiatus,[1] is notable for its two recurring lead characters and ambiguous continuity; though each game is its own self-contained story, the names of the two lead characters are usually Ryu and Nina. The stories commonly involves around the adventures of Ryu, who can shapeshift into different types of dragons, and Nina, a magical girl with wings.

At its inception, Breath of Fire took place in a medieval fantasy style fictional world. Following the mainstream success of Japanese role-playing games in the 1990s,[2] the series began using the original anime-style artwork for later Western releases of the games (rather than the Westernized art that was drawn specifically for the Western releases of the first two games), post-apocalyptic themes, and an increased emphasis on character development. Despite these changes, the core structure of Breath of Fire remains largely linear and plot-focused. Six main titles have been released and as of December 31, 2019, the series has sold 3.2 million units worldwide.[3]

Where as many RPG series tend to re-invent themselves with every game, the Breath of Fire games have retained essentially the same tone and style of gameplay throughout the entire series. Only the fifth and sixth games differs greatly in these aspects from the original. Some changes are introduced with each sequel, as is to be expected. For example, Breath of Fire III blends the semi-medieval backdrop of the first two with a degree of science fiction, eventually revealing itself as a post-apocalyptic world. In addition, the more recent games have replaced the traditional worldmap setup with a more "point and click" based one, similar to those commonly featured in strategy games. Despite these aesthetic changes, the core gameplay remains intact.

As in most console RPGs of the era, the main conflict in the Breath of Fire series is the battle between good and evil. Although this theme is extremely common in RPGs, the Breath of Fire series is unique in its treatment of the subject in that the plot is of a decidedly religious nature. In each installment of the series, the main antagonist is a demon or Goddess, often masquerading as a monotheistic deity; the protagonist Ryu, the last surviving member of the messianic dragon clan, must save the humans from their false god. The plot often involves corrupt or misled religious leaders who are eventually revealed to have helped the foe.

Although religion in games is not an uncommon theme today, it was extremely unusual in the 16-bit era when the series first debuted, and the early Breath of Fire games are considered by some as a pioneer of this trend. While topics of faith had long since been considered fair game in Japan, they were largely ignored by American companies who feared that the subject was too controversial. Typically, when a game which had any religious references in it was ported to an American console, (usually from a Japanese or PC version of the original) all of those references, no matter how small, were edited out (such as the SNES Ultima games). There were even a few cases of games that were denied American releases specifically because they were deemed as being too religious in content.

At its inception, Breath of Fire took place in a medieval fantasy style fictional world. Following the mainstream success of Japanese role-playing games in the 1990s, the series began using the original anime-style artwork for later Western releases of the games (rather than the Westernized art that was drawn specifically for the Western releases of the first two games), post-apocalyptic themes, and an increased emphasis on character development.

Although usually not brought up too much, the first three games and Breath of Fire 6 are firmly implied or confirmed to occur in a single timeline.

Breath of Fire IV has no noticeable ties to any of the games before it, and Capcom has never commented on its place in the timeline if any, leaving its connection to the original trilogy uncertain. While fans have developed theories placing it at different points in the trilogy or in a parallel world, no official word has come confirming anything. Breath of Fire V, on the other hand, is something of a departure from the other games and Capcom has confirmed that it takes place in a separate universe.[citation needed]

The character designs have changed little for the core characters. Ryu's character has blue hair, wields a sword and fishes with a rod. Nina's character is a Caucasian-looking blonde female with wings (or clothing resembling wings) who provides magical support. Bleu is (in four of the games) an ageless, enigmatic, powerful magic user resembling a lamia who begins the game in a state of suspended animation.

The music of each Breath of Fire games has traditionally been produced by rotating members of Capcom's in-house sound team. While the themes from first game were composed by five members of the company's sound team Alph Lyla, which included Yasuaki Fujita, Mari Yamaguchi, Minae Fuji, Yoko Shimomura and Tatsuya Nishimura, the second game's score was produced entirely by fellow company composer Yuko Takehara.[8] Breath of Fire III's soundtrack took a jazz-inspired approach, and was written by the team of Yoshino Aoki and Akari Kaida, with the music of Breath of Fire IV provided solely by Aoki herself. For the first time in the series, the music of Breath of Fire: Dragon Quarter was created by an outside employee, Hitoshi Sakimoto, with Yasunori Mitsuda serving as music producer on the project.[9]

In March 2006, Capcom released the 11-disc Breath of Fire Original Soundtrack Special Box boxset on their in-house record label Suleputer, which contained all music from the first five games in the series.[8] The set includes the first-ever soundtrack release of the original Breath of Fire, as well as the first complete soundtrack releases for Breath of Fire II and Breath of Fire III, which had previously only received single-disc selections during their original printings, with a total of 307 tracks from all five titles.[10] Capcom produced a limited run of only 2000 copies of the boxset, which was distributed on their online store e-Capcom, as well as special retailers, and included a 28-page booklet featuring art from the series.[10]

The Breath of Fire franchise has to date sold a total of 3.2 million units worldwide, with Capcom calling it their "best known and most successful role-playing game".[3] Sales of each successive title continued on an upward slope which peaked at the PlayStation entries in the series, with the fifth game, Breath of Fire: Dragon Quarter on the PlayStation 2, representing a significant dip.[11] Each title received mostly positive reviews from aggregate review websites GameRankings and Metacritic, with critics such as Gamasutra finding each game to be good, but largely formulaic, calling the franchise "always solid, if not particularly ambitious".[2] The series has routinely been compared to Square Enix's popular Final Fantasy games, with GameSpot stating that while the Breath of Fire games have never been as well received as more famous RPG franchises like Final Fantasy, the series "indicates that Capcom is definitely learning something about the fine art of RPG development".[12]

In May 2009, nearly seven years after the release of the latest game, Breath of Fire: Dragon Quarter, readers of Japanese gaming magazine Famitsu voted the series 6th in the publication's survey of the "Top 50 Most Wanted Game Sequels".[13] IGN would later name Breath of Fire the 4th greatest Capcom franchise of all time in June 2010, stating that "Though the Breath of Fire games evolved across the SNES to the PlayStation 2, the core held steadfast to Japanese RPG formulas – something that many gamers still celebrate."[14]

In a December 2008 interview, Capcom's former Head of Production Keiji Inafune stated the Breath of Fire series would be put on hiatus due to the company's lack of staff and an increasingly competitive role-playing game market, stating "There are currently no plans on making a new Breath of Fire game. Apart from that, regarding RPG titles, they are very popular in Japan, but only certain RPG titles sell so Capcom doesn't really need to even consider making these titles as an option".[1] Capcom USA Vice President of Strategic Planning Chris Svensson would later claim on the company's official message boards in June 2009 that the series remains a "resting IP".[15] Other companies such as Camelot Software Planning have expressed interest in developing a title for the series if Capcom remained unwilling to do so.[16] 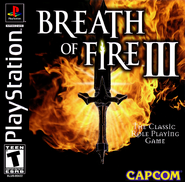 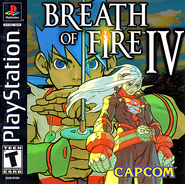 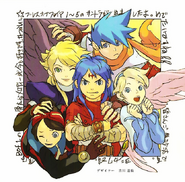