Bon Bonne is a character in the Mega Man Legends series.

Bon frequently conveys a personality in line with his perceived age; he acts and performs mannerisms similar to a young child, albeit on a slightly higher intelligence level.

Bon is the youngest sibling in the Bonne family, the other two being Tron and Teisel. Although he is quite a strong warrior throughout all three Legends games, he is really just a big baby. Even though he is only able to utter the word "Babu", everyone in the Bonne family is somehow able to understand everything he says. Aside from this, Bon is more of a cameo appearance than a physical character, and thus has little to no history or character development.

In Mega Man Legends, Bon fights against MegaMan Volnutt in a flying body called Schmetterling. He attacks with claps, missiles and his tongue, and destroys objects in his way like trees with punches. Schmetterling also appeared in the game Rockman DASH: Great Adventure on 5 Islands!.

In Mega Man Legends 2, Bon used a smaller body with a powerful drill. 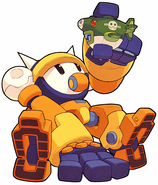 With Tron and Teisel
Community content is available under CC-BY-SA unless otherwise noted.
Advertisement