Bomb Man (ボンバーマン Bonba-man) is a character from the Mega Man series. He first appeared as one of the Robot Masters from the original Mega Man game.

Bomb Man was originally created by Dr. Light for the purpose of demolishing unnecessary buildings. He often worked with Guts Man on constructions jobs. It is somewhat of a mystery how Bomb Man is able to continually create bombs.

In Dr. Wily's first bid for world conquest, he stole and reprogrammed Bomb Man for battle. Used for offensive tactics, Bomb Man's Hyper Bomb is a powerful weapon. However, not all of Bomb Man's appearances are as a villain. In Super Adventure Rockman, Bomb Man serves as an ally to Mega Man, and in Mega Man Powered Up, Bomb Man can be rescued and becomes a playable character.

Bomb Man has a penchant for showy and flashy things, but he doesn't really treasure anything. He enjoys a good game of bowling, and stays clear of matches and lighters.

"Bomb Man was created for land development purposes just like Guts Man, and is equipped with demolition explosives called Hyper Bombs. The range of a Hyper Bomb's explosion can be adjusted via its settings. In order to avoid any unnecessary damage and related inconvenience outside its designated target range, micro bombs detonating around the area of the explosion are used to contain the shockwave from the blast of a Hyper Bomb. Through Dr. Light's ingenuity, explosive blasts became something that could be controlled like never before. Bomb Man is not a complex robot by any means, and enjoys big, flashy things like fireworks." 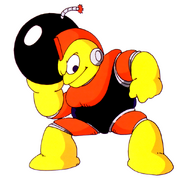 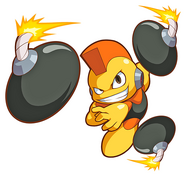 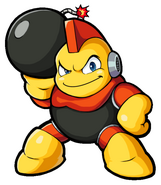 Street Fighter × All Capcom
Add a photo to this gallery
Retrieved from "https://capcom.fandom.com/wiki/Bomb_Man?oldid=125161"
Community content is available under CC-BY-SA unless otherwise noted.