Blood is a robust young American expert swordsman who fights with a Plasma Broadsword and that he had once worked under Bilstein as a brainwashed servant. During the events of Plasma Sword, Blood had regained his freewill and was determined to defeat Bilstein and atone for the sins he had commited while under Bilstein's spell.

Blood was taken in by Bilstein at a very young age, due to the fact that his parents were killed by the villain. Blood had a very high amount of Plasma Power stored in his body, so Bilstein had sought to use this potential in his Plasma research. Knowing too well however that the FBI was on a very quick lead to finding many missing persons and was on a trail leading to him, using a manipulative Plasma spell, Bilstein was able to take control of Blood's mind and made him into a personal soldier of the future Fourth Empire. Giving him one primary directive, Blood's purpose was to be a sleeper assassin on Earth and hunt down any who had the potential to have great Plasma Power to ensure the Earth Federation would have no chance against the Fourth Empire.

When Bilstein had made his escape from Zeta, Blood was freed from stasis and broke free from the American branch laboratory that was under heavy government surveillance. Soon after changing his appearance to hide from the authorities, Blood then began his rampage and killed anyone that matched his criteria. When the Star Gladiator project was announced, Blood made his way onto the project as an insider. Upon assignment, Blood slowly offed many of the Star Gladiators, but was confronted by Hayato and June, and was forced to retreat when he was severely injured.

However, when Bilstein was killed by Hayato at the end of the Final Crusade, Blood was freed from the spell and had regained his inner freewill.

Despite this, the damage was already done and was irreversible; Blood's robotic left arm was dependent on Bilstein's existence and realized that he had killed far too many innocent people. Sickened by the brainwashing microchip that had controlled him and upon learning of Bilstein's unexpected return in Plasma Sword, Blood heads to the emperor's side in a mission of eliminating him once and for all. Blood walks on a path of moral redemption, intending to kill Bilstein and himself for the sins that were committed in the name of the Fourth Empire. In Blood's scenario to defeat Bilstein, the Fourth Empire flying fortress would begin to collapse and that Blood would sacrifice himself to reduce and lessen the reactor's explosion in order to save the Earth and its people.

The one who calls himself Shaker is just one of the many clones of Blood in Plasma Sword who strangely shares his progenitor's levitating robotic left arm and Plasma Broadsword. Shaker's brethren bicker over which one of them is the original Shaker and most of them battle against one another in a never-ending fight. All Shakers love punk music and guitars in their spare time. 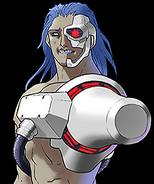