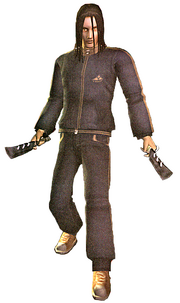 He was a sadomasochistic, assassin for mob boss Vito Bracca, before killing Vito and revealing that he worked for Father Bella all along. He and Kyle fight, when Bella orders him to kill Cody. With his high-flying acrobatics and skills fighting with two knives (much like Holly Wood and El Gado in the original game), Blades proved a challenge to Kyle, but was eventually defeated by him in a Metro City graveyard. Blades has the ability to block bullets with his knives, (a trick he oddly does not utilize in his last appearance).

Blades and The Stiff had a mob of well-dressed killers at their beck and call known as the Elite Guard.

Blades faces Kyle for a final time, after he's injected with a substantial amount of GLOW by Dr. Chang in Father Bella's church. Now known as "Famine", he faces Kyle in a room of the church after he kills Kyle's ally, Sergeant Sims. His attacks ranged from throwing knives, stretching his arms and hitting Kyle with them or an unblockable grab move where Famine flings Kyle towards him and hits him with a brutal headbutt, breaking his nose and spilling blood all over the floor.

With slightly increased strength and the ability to stretch his arms, Famine fights Kyle before being defeated by him and falling dead.

Retrieved from "https://capcom.fandom.com/wiki/Blades?oldid=123198"
Community content is available under CC-BY-SA unless otherwise noted.